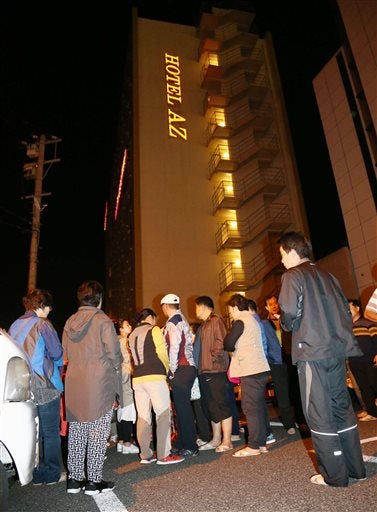 People gather outside a hotel after an earthquake in Kumamoto, southern Japan, Thursday, April 14, 2016. A powerful earthquake with a preliminary magnitude of 6.4 has struck southern Japan. Japan’s Meteorological Agency said the quake hit at 9:26 p.m. (1226 GMT) and was centered in the Kumamoto prefecture. (Kyodo News via AP)

(UPDATED) TOKYO–A powerful earthquake with a preliminary magnitude of 6.4 struck southern Japan on Thursday, causing some damage but there was no danger of a tsunami.

Officials said they were still assessing the damage.

Keisukei Urata, an official at Uki city, said he was driving home when the quake struck at 9:26 p.m. in the nearby town of Mashiki in Kumamoto prefecture.

He said he saw some walls around houses collapsing.

Parts of the ceiling at Uki City Hall collapsed, windows were broken and cabinets fell to the ground, he said.

Kasumi Nakamura, an official in the village of Nishihara near the epicenter, said that the rattling started modestly and grew violent, lasting about 30 seconds.

“Papers, files, flower vases and everything fell on the floor,” he told a telephone interview with NHK TV. He said there were aftershocks.

One aftershock measuring 5.7 struck about 40 minutes later, according to Japan’s Meteorological Agency. 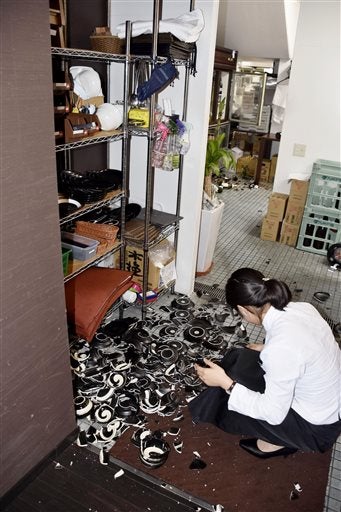 A woman collects fallen dishes at a restaurant after an earthquake in Kumamoto, southern Japan, Thursday, April 14, 2016.. (Kyodo News via AP)

The U.S. Geological Survey put the quake’s preliminary magnitude at 6 and said it was 23 kilometers (14 miles) deep. It did not expect major damage.

Footage on NHK showed a signboard hanging from the ceiling at its local bureau violently shaking. File cabinets rattled, books, files and papers rained down to the floor, and one employee appeared to have fallen off a chair, while others slid underneath their desks to protect their heads.