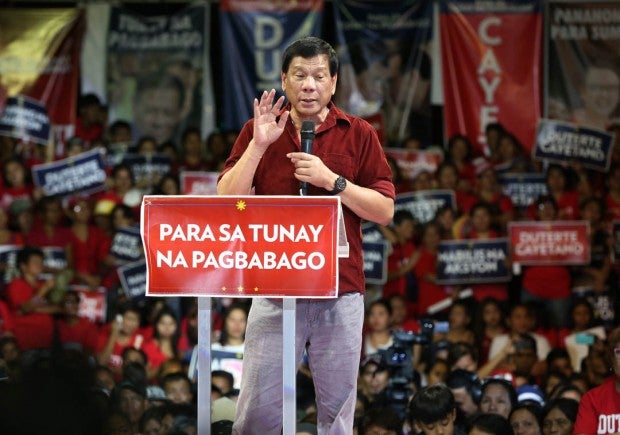 The camp of Davao City Mayor Rodrigo Duterte is “humbled” by the recent Pulse Asia survey results, showing the tough-talking mayor in solo lead in the presidential race.

“We are humbled by the results of the recent survey which have Mayor Rody Duterte now in the lead in voter preference,” Peter Tiu Laviña, Duterte spokesman, said in a statement on Tuesday.

But despite his numbers going up, his camp said it is a long way to go.

“While we welcome this with guarded optimism, we are fully aware that the battle is not yet over,” Laviña said.

“We will continue to build on this momentum and aim for a complete, decisive and indisputable victory for genuine change,” he added.

Laviña urged Filipinos to convince others to take the path of real change Duterte has vowed to carry out.

“We urge the people to remain steadfast and to continue to reach out to the undecided.  We need to convert and convince others that the path to real change is through the unparalleled and decisive leadership that Mayor Duterte has been providing us,” he said. CDG

Dependent on Duterte? Cayetano says he can stand on own merits