Binay asks public not to vote for ‘berdugo’ Duterte 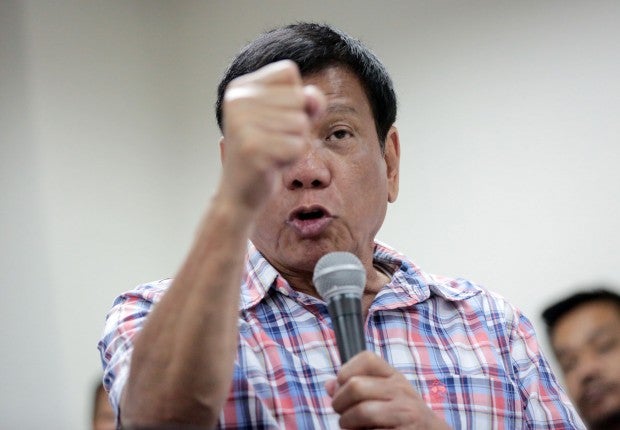 With Davao City Mayor Rodrigo Duterte leading in the latest voters preference survey, Vice President Jejomar Binay appealed to the public to exercise “moral responsibility” and not vote for a “berdugo” (butcher) like Duterte.

Binay made the appeal in an exclusive sit-down interview with Radyo Inquirer 990AM on Monday.

According to Binay, Duterte’s victims were “mga taong mahirap” (poor people) especially children and the old.

The Vice President, a human rights lawyer under the Marcos regime, branded Duterte’s choice of words as “unchristian” and “unlawful” which tended to violate human rights.

“Baka naman kapag ikaw ay bumoto kay Duterte, humahanga ka rin sa ginagawa niya. Unlawful yan. May batas na hahatol kung may kasalanan pala,” (Maybe if you vote for Duterte, you admire what he does. That’s unlawful. There is a law that will judge the guilty) Binay said.

Binay made the statement after Duterte led the latest Social Weather Stations survey (first published in BusinessWorld) conducted March 30 to April 2 with 27 percent of 1,500 respondents.

In that survey, Binay further slid down the numerical rankings with 20 percent, landing in third place after Senator Grace Poe with 23 percent. With the survey having a margin of error of plus or minus three percent, Binay and Poe are statistically tied in second place.

In the interview, Binay said he no longer believed in the credibility of the surveys, which he consistently led until he was accused of corruption by the Senate and the Ombudsman over graft-ridden deals when he was Makati mayor.

“Ang pinakatamang survey ang resulta ng eleksyon,” (The most correct survey will be the result of the election) Binay said.

Asked if he still believed in survey results, Binay said: “Not at the moment,” adding that it used to be reliable when he was the one leading.

Binay lamented the lack of due process perpetuated by Duterte, who was alleged to be behind the Davao Death Squad, a notorious vigilante group that allegedly summarily executed drug pushers and criminals in his city.

The Vice President said the admissions of Duterte that he was affiliated with the notorious Davao Death Squad could be considered evidence that he was behind the spate of killings in Davao City.

He said Duterte could also be called a “king of lies” for denying that he had a hand in the extrajudicial killings in Davao even though the Amnesty International already investigated him over allegations that he was behind the summary executions.

When rights group Amnesty International in December 2015 issued a statement condemning Duterte’s record of human rights violations, Duterte said the group understated his record and bragged that he had killed 1,700 people, not 700 people.
READ: Kill the criminals! Duterte’s vote-winning vow

Binay refuted Duterte’s statement that Davao city was crime-free, saying that the city ranked fourth with the most number of crime incidents in the country.

READ: PNP chief: Duterte promise just words
According to the Philippine National Police crime statistics from 2010 to 2015, Davao city ranked fourth with the most number of crimes at 37,684 incidents Quezon City topped the list of the 15 chartered cities with 65,514 incidents, followed by Metro Manila’s capital Manila with 54,689 incidents; Cebu City with 38,797 incidents; Davao City with 37,684 incidents; and Cagayan de Oro with 31,345.

Duterte had vowed to stamp out criminality within six months of his administration – a feat the police and his rivals said was impossible.

Binay urged the voters not to vote for Duterte lest they regret it when the time comes that their loved ones would be the ones summarily executed by Duterte’s goons.

Binay had come out swinging against Duterte after the latter has been edging out Binay in the voters’ preference surveys.

While he was hailed for his anti-crime crusade, Duterte had been linked to the Davao Death Squad, an alleged gang of assassins purportedly responsible for the deaths of 1,000 suspected criminals in the city since Duterte became mayor in 1988.
“They say I am the death squad? True, that is true,” Duterte once said in a television interview admitting his ties to the alleged group.

The New York-based Human Rights Watch has expressed concern about Duterte’s support of extra-judicial killings amid a rise in summary executions of suspected criminals in the city.

The Human Rights Watch in a commentary even called Duterte the “Philippines’ Death Squad Mayor.”

“The Philippine government should take a zero-tolerance approach to any public official who publicly endorses extrajudicial killings as an acceptable means of crime control,” Phelim Kine, HRW deputy Asia director, said in a statement last year.

READ: Duterte to rights group: You are all hypocrites

Read Next
Escudero brushes off comments on his ‘robotic’ tone
EDITORS' PICK
Smart offers wireless fiber-like speeds to Filipino homes with country’s first 5G Prepaid Home WiFi
Legarda: Ending Violence Against Women, a cause for all
This new condo in the South will make you want to turn a new leaf
National COVID-19 vaccination drive gets over 5.3 million people vaxxed so far
Pandemic prognosis: Where does it go from here?
Google won’t accept election ads for 2022 national polls
MOST READ
Bongbong Marcos to face another disqualification case
Christine Bersola, Julius Babao cleared of cancer after colonoscopy, endoscopy
Former PM Abe says Japan, US could not stand by if China attacked Taiwan
New Comelec commissioner gets CA nod
Don't miss out on the latest news and information.