PH among fastest-growing economies in Asean in 3 years — WB 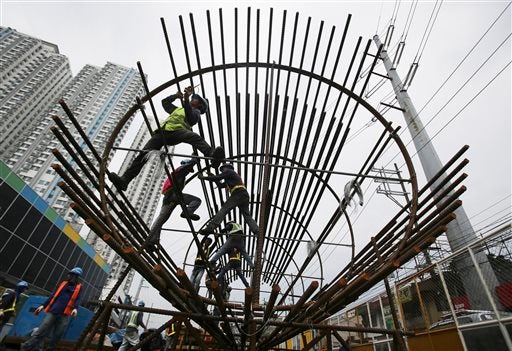 In this Aug. 12, 2015 photo, Filipino workers arrange metal rods at a government road project in suburban Quezon City, north of Manila, Philippines. The World Bank sees that the Philippine economy would continue to be among the fastest growing in the Asean region in the next three years. AP FILE

The Philippines will remain one of the fastest-growing countries in East Asia and the Pacific despite a “modest” easing in economic expansion in the region in the next three years, a new World Bank report showed.

“Among the large developing Southeast Asian economies, the Philippines and Vietnam have the strongest growth prospects, both expected to grow by more than 6 percent in 2016,” the World Bank said in a statement, based on its latest East Asia and Pacific Economic Update released Monday.

The Washington-based lender expects the Philippine economy to expand by 6.4 percent this year and 6.2 percent in 2017 and 2018.

Across developing East Asia, growth was projected to ease to 6.3 percent this year from 6.5 percent last year.

“Developing East Asia and Pacific continues to contribute strongly to global growth. The region accounted for almost two-fifths of global growth in 2015, more than twice the combined contribution of all other developing regions,” it said.

It added, “The region has benefited from careful macroeconomic policies, including efforts to boost domestic revenue in some commodity-exporting countries.”

“Developing East Asia and Pacific faces elevated risks, including a weaker-than-expected recovery in high-income economies and a faster-than-expected slowdown in China. At the same time, policy makers have less room to manoeuver in setting macroeconomic policy,” said Sudhir Shetty, chief economist of the World Bank for East Asia and Pacific Region.

Shetty added, “Countries should adopt monetary and fiscal policies that reduce their exposure to global and regional risks, and continue with structural reforms to boost productivity and promote inclusive growth.”