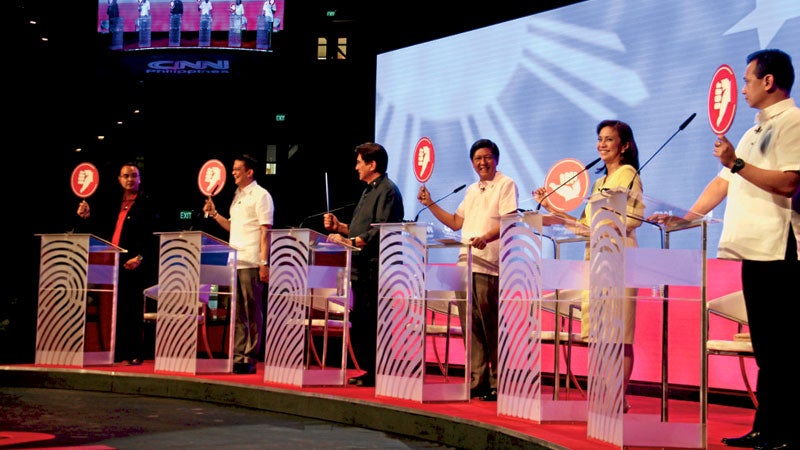 RIVALS ganged up on Sen. Ferdinand “Bongbong” Marcos Jr. during the first and only vice presidential debate Sunday over his father’s record on corruption and human rights.

Most of the people in the audience joined in the bashing of the son and namesake of the late dictator Ferdinand Marcos who shared with Sen. Francis Escudero the top two slots in recent voter popularity surveys on the vice presidential race barely a month before the May 9 elections.

But the way he was hammered by the other presidential aspirants, the young Marcos appeared to be the man to beat in the balloting.

Marcos had barely begun his opening remarks during the debate sponsored by the Commission on Elections and CNN Philippines when hecklers at the gallery unfurled posters against the senator, chanting “Never again to martial law.” Security whisked them away.

At one point, he mistakenly raised the “yes” (green) side of his signboard, albeit briefly, on the first yes-or-no question during the debate: Have you ever been involved in corruption?

It did not help that Marcos remarked, “In my 27 years in public service, I have not been tainted by corruption.” Boos from the audience followed, drowning out the loud cheers of his red-clad supporters.

Marcos’ statement got the ire of Sen. Alan Peter Cayetano who, drawing a contrast between him and his Senate colleague, pointed out that the dictator’s son never attended a single Senate hearing on any corruption scandal.

“I was in Edsa 1 (People Power Revolution), Edsa 2, protested against (Vice President Jejomar) Binay and (former President Gloria Macapagal-Arroyo). Others would just disappear when there’s a hearing on a corruption issue,” said Cayetano, the independent running mate of Davao City Mayor Rodrigo Duterte.

This began tense exchanges that would dominate the first hour of the CNN-led debate at the half-filled University of Santo Tomas Quadricentennial Pavilion.

“Senator Bongbong said he is not tainted by corruption. But his family stole $10 billion. He diverted P205 million of his PDAF (Priority Development Assistance Fund) to Napoles NGOs (nongovernment organizations). I don’t know if that’s what you mean by being untainted,” Cayetano said.

He referred to jailed businesswoman Janet Lim-Napoles, mastermind of the PDAF diversion fund scam where several lawmakers have been implicated.

“Just wait if you make him Vice President, the stolen money might reach $100 billion,” Cayetano said.

Looking incredulous, Marcos said his opponent seemed to have pulled his numbers out of thin air, and questioned why his fellow senator was raising the matter only now.

Unfazed, Cayetano proceeded: “Your SALN (Statement of Assets and Liabilities) says P200 million to P500 million (in assets), but you never worked [outside government]. Where would you get that amount of money?”

Marcos said his family had faced all litigation related to martial law: “All orders from the court, we follow them.”

He also defended his absence from Senate hearings on corruption cases. “It was very clear to me that what they were doing was not anticorrruption but politicking,” he said.

He also denied ties with Napoles, saying he had been wrongfully accused of involvement in diverting his PDAF to bogus NGOs.

“If you read her affidavit, Napoles herself cleared my name. We were never photographed together. It’s clear that I had nothing to do with the PDAF scam and I am surprised that this is coming out just now because of politicking,” Marcos said.

Marcos replied: “I cannot give what I do not have, I have no knowledge of.”

Asked on his stand on human rights violations, Marcos said he acknowledged every human right violation in every administration. “It is necessary to do so otherwise we will repeat the mistakes of the past.”

He maintained that he had never fallen under suspicion of violating human rights in his 27 years of service in government and said that he had obeyed court decisions on the Marcoses’ ill-gotten wealth, but Robredo argued that the family had not abided by the directives of the courts in the United States and Singapore.

“It is so clear that we are in the middle of the campaign period,” Marcos said exasperatedly and claimed that the government itself, “headed by the LP,” was blocking the means by which human rights claimants can be recompensed.

“The government must withdraw its claim so the human rights victims will be compensated,” the senator said.

Cayetano cut in, “20 years (of the Marcoses in power) was not about peace and order. It was about keeping one family in power.”

He claimed that Senator Marcos allied himself with Presidents Gloria Macapagal-Arroyo and Joseph Estrada to avoid returning $1 billion that his family still possessed, causing Marcos to tell him in irritation, “I do not know where that is coming from. He (Cayetano) has been inventing so many things.”

Escudero, the vice presidential candidate of presidential aspirant Grace Poe, said an apology for past mistakes would be moot and academic at this point.

It was better to come up with measures such as a human rights compensation bill and an anti-enforced disappearance act to prevent abuses from recurring, said Escudero, whose father was a Marcos agriculture minister.

For his part, Sen. Gregorio Honasan, the vice presidential candidate of Vice President Jejomar Binay, said: “Human rights is universal. It does not recognize family names. We have to strengthen our institutions.”

Momentarily panning the focus away from Marcos, Robredo asked Escudero if he did anything about discretionary funds such as PDAF during his nine years in the House of Representatives.

The question came after Escudero’s response on the corruption question, where he said he and his presidential candidate Poe would clamp down on corruption by identifying all forms of discretionary funds in the government budget.

Robredo asked if the long-time lawmaker had taken steps to get rid of the PDAF before the controversy broke out.

Escudero, who was Sorsogon representative from 1998 to 2007, said he as senator implemented the Supreme Court order abolishing the PDAF and wrote it into the General Appropriations Act.

Robredo, Camarines Sur representative, replied: “Even us in Congress we implemented that. But that’s not my question. You were in Congress for a long time. What did you do to remove the PDAF?”

Escudero evaded the question, replying instead: “For nine years, I did not have the PDAF under the Arroyo administration because I fought for the truth.” The senator led impeachment efforts against Arroyo in the House in 2005.

But the two candidates seemed to have agreed on one thing when, earlier in the debate, they both aired the need for Congress to finally pass a freedom of information (FOI) law.

Escudero, coauthor of the proposed FOI bill in the Senate, said such a law was critical in the fight against corruption.

“It will serve as a spotlight and camera on government transactions. It will be easier to spot and catch corruption. Whoever is liable will be held accountable and jailed,” he said.

Robredo, coauthor of the FOI bill in the House of Representatives, meanwhile, said her version of the measure was “different from the Senate version,” in that it requires government to release public documents even without the demand.