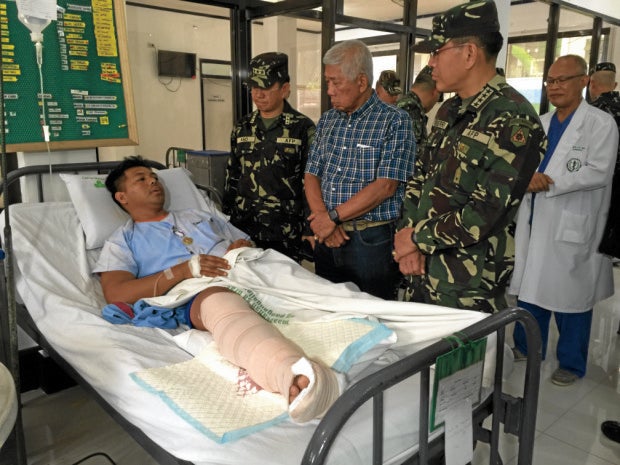 ZAMBOANGA CITY – The mission: Pursue Abu Sayyaf bandits believed to be harboring foreign terrorists. The result: A total of 18 soldiers killed and 56 others wounded.

“The forward troops ahead of us were hit by a landmine. Then suddenly, gunfire was all over the place,” Sergeant Erico Paglinawan narrated to the Philippine Daily Inquirer in his hospital bed here.

Paglinawan said at least 30 soldiers from the Charlie Company of the 44th Infantry Battalion were traveling on foot when a landmine exploded in the village of Baguindan in Tipo-Tipo town in Basilan at 7 a.m. Saturday.

With the 44th IB soldiers were troops from the 4th Special Forces.

Paglinawan was hit in the chest.

“Blood was flowing. It was like water coming from a faucet,” he said.

While waiting for medical evacuation, which came three hours later, Paglinawan drank his own blood, thinking that this would prevent him from bleeding to death.

“I drank my own blood,” he told the INQUIRER.

Paglinawan was one of the 56 soldiers who were wounded in the 10-hour fighting with the Abu Sayyaf bandits. The wounded soldiers included the 44th battalion commander, Col. Tommy Crosby, and three officers.

Capt. Kilbas Mauricio, who was hit in the left leg, said the clash started with an explosion, then followed by a “ball of fire around us.”

“We are mourning. The whole Armed Forces is mourning the deaths of our heroes,” Iriberri said

“Despite heavy enemy resistance and advantage in the familiarity with the terrain in Basilan, our troops fought gallantly. We salute our troops as they displayed the finest traditions of soldiery and bravely fought the bandits with utmost valor,” he said.

But Iriberri added: “After we grieve for our soldiers, we shall continue to fight to win the peace for our people. Our soldiers made the ultimate sacrifice so that the people of Basilan will be free from terrorists and secure a peaceful and bright future for their next generation.”

Iriberri said the government troops were in an encounter, and were not ambushed.

“It was really an encounter, and as of now, we cannot still get into the details because as we speak, operations are still on-going,” he said.

Iriberri said he wanted the troops to focus on the operation.

“We still do not have a clear picture of what happened, but rest assured that once everything settles down, we can give the statement,” Iriberri said.

Iriberri explained to reporters that the troops were on a mission to get high value targets and to prevent kidnap for-ransom groups from merging as one.

He said Moroccan terrorist Mohammad Khattab, who was killed in Saturday’s encounter, was “an IED (improvised explosive device) expert who wanted to unify, organize all kidnap-for-ransom groups to be affiliated with an international organization.”

Iriberri said that as early as December 2015, troops in Basilan have been fighting the Abu Sayyaf Group that has been harboring foreign terrorists.

He cited the clash in Makalang, Al Barka town in Basilan on December 15, 2015, where suspected Malaysian terrorist, Mohammad Najib Hussin, was killed.

“This is the same group. It transferred to Tipo-Tipo.  That is why we conducted this operation,” Iriberri said.

“Khattab was also part of that group in Makalang,” he said.

Wounded soldier Sgt. Erico Paglinawan said some of the soldiers were on foot while some were in vehicles when they were attacked.

When those in the frontline — members of the Charlie Company of the 44th IB — stepped on a land mine, five of his colleagues died on the spot, Paglinawan said.

Members of the 44th on the frontline were followed by the Cavalry unit in five armored vehicles, and the units of the 4th Special Forces Battalion.

“It was a close gunbattle, very deafening,” Paglinawan said.

Maj. Filemon Tan Jr., spokesperson of the Western Mindanao Command, said it was a close quarter combat, with government troops and the Abu Sayyaf bandits just about “10 meters” away from each other.

Tan denied reports that some of the troops were beheaded. He said some of the soldiers lost their heads due to the powerful firearms used by the bandits.

“And it doesn’t mean that the mutilation was through cutting of the throat, it could be due to bullets,” he said.

A military source said two members of the 44th IB were decapitated.

Iriberri also said it was too early to say if the troops were subjected to “pintakasi,” a situation wherein different armed groups and members of the community would join the bandits in the fight against the government forces.