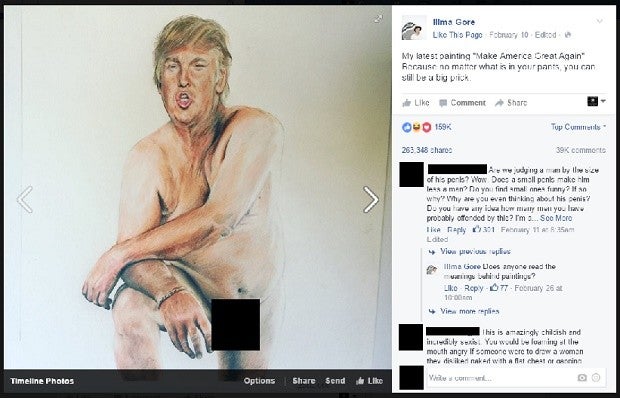 A screenshot of artist Illma Gore’s Facebook post shows her painting of a naked Donald Trump. The painting titled ‘Make America Great Again’ is on display at the Maddox gallery in London. It has been valued at $1.4 million. ILLMA GORE FACEBOOK PAGE SCREENSHOT

LONDON, United Kingdom — An unflattering painting depicting a nude Donald Trump went on show in London this weekend having being censored in the United States, where its creator claims to have received a thousand death threats from his supporters.

Los-Angeles based artist Illma Gore’s “Make America Great Again”, named after the Republican candidate’s campaign slogan, went on display at the Maddox gallery in the exclusive Mayfair neighborhood on Friday, and is valued at £1 million ($1.4 million, 1.2 million euros).

READ: Duterte: Trump is a bigot, I am not | Giuliani announces he’ll be voting for Trump in NY

“Make America Great Again was created to evoke a reaction from its audience, good or bad, about the significance we place on our physical selves,” said the 24-year-old artist.

“I drew Trump nude, I was evoking a reaction from people… so I tried not to think about it until I spoke to a lawyer who suggested I go to the police about it and file a report in case something happens,” she said of the death threats, which came after posting the painting online.

The work, which imagines Trump with a small penis, has been banned from public display in the US and was pulled from social media following the filing of a Digital Millennium Copyright Act notice, claiming that the content infringed on their copyright.

Gore said that the painting’s appearance in London showed that “the UK has a real taste for art and enough experience to recognize the idea behind it.”

James Nicholls, director of the gallery, said the work was “contested and interesting.”

“Some, he said, may be offended but others will see the humor in the work of Gore. The Maddox Gallery offers everyone the chance to see the original and make his own opinion.”