Giuliani announces he’ll be voting for Trump in NY 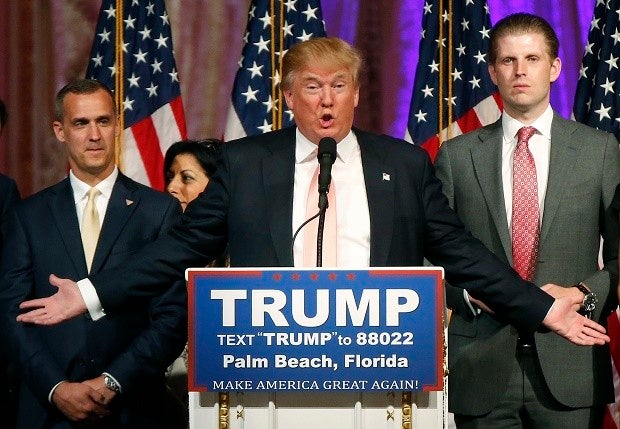 In this Tuesday, March 15, 2016, file photo, Republican presidential candidate Donald Trump speaks to supporters at his primary election night event at his Mar-a-Lago Club in Palm Beach, Fla. Trump is railing about what’s wrong in corporate America as he woos voters fed up with the status quo. He is blasting drugmaker Pfizer’s tax-saving plan to move its headquarters overseas, refusing to eat Oreo cookies made in Mexico and vowing to get Apple to make iPhones in the US His tirades about unfair competition, tax evasion and lost jobs trumpet a familiar tune, but going further than many others running for president have dared. AP FILE PHOTO

NEW YORK — Donald Trump’s bid for the White House is getting a boost from New York City’s former mayor.

Rudy Giuliani is planning to vote for Trump in the upcoming New York Republican primary.

Giuliani’s spokesman Jake Menges said Thursday that the former mayor considers Trump “a friend,” and always believed he would back Trump over his rival Ted Cruz.

Giuliani did not make an official endorsement because he won’t be doing any campaigning on Trump’s behalf.

Giuliani, who was the city’s mayor when it was attacked on September 11th, made a failed bid for the 2008 Republican nomination.

He has made several previous public appearances with Trump, including at a golf tournament last summer after Trump announced his candidacy.

The New York primary will be held April 19.

RELATED STORIES
Reluctantly, Obama embracing his role as the anti-Trump