‘If he loses in this fight, he will also lose in the elections’
By: Jhunnex Napallacan - @inquirerdotnet
Inquirer Visayas / 08:06 PM April 09, 2016 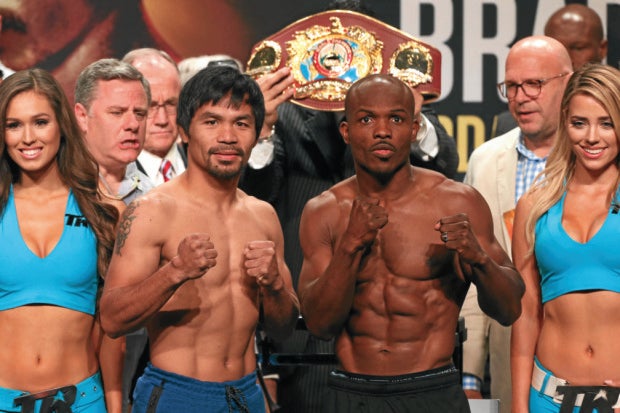 Some Cebuanos didn’t even know that the bout was scheduled on Sunday. Other fans had decided not to bet on this fight because they found it uninspiring.

“I don’t want to place my bet because I do not like the bout because it is their third already,” said Cecille Taxi driver Cris Alivio, 33, of Barangay Mohon, Talisay City, Cebu.

Alivio said he had been betting on the Pacquiao fights.

When the Filipino boxing champion fought with Floyd Mayweather Jr., he placed his bet on the latter and won P500.

This time, he added, he would not bet because he did not find the Pacquiao-Bradley fight exciting.

He said he believed Pacquiao would win because the Filipino boxer could not afford to lose as it might affect his senatorial bid.

“If he loses in this fight, he will also lose in the elections,” he said.

Another taxi driver, Noel Salvador, 45, from Minglanilla, said it was obvious that Pacquaio had the advantage in this fight.

He said the only reason Bradley won in his last fight with Pacquiao, who did better, was because of the judges’ decision.

Porter Allan Osabel, 43 from Inayawan, said he had no interest in watching the fight anymore because he knew the fighting style of Bradley which he said was no match with Pacquiao.

Borneleny Ras, a security guard assigned at the Cebu Port Authority gate at Pier 1, was not even aware that the Pacquaio-Bradley fight would be on Sunday.

“Pacquaio’s fight will be tomorrow?” he asked his fellow security guard Glenn Encarnacion.

Encarnacion said even his neighbors in Barangay San Roque in Cebu City also thought that that the Pacquiao fight would be on April 23.

But there are die-hard fans of Manny Pacquiao who have placed their bets on their idol.

Soft-drink company worker Joseph Anthony Cayanong placed a P2,500 bet on Pacquiao to show his support for the boxing icon.

During the Pacquiao-Mayweather fight, Cayanong lost P5,000 for betting on the Filipino champ.

Cayanong said he was again looking forward to watching Pacquaio’s fight with Bradley.

An engineer, who asked for anonymity, placed a P5,000 bet that Pacquiao would win without a knockout.

Anton Caidoy, operations manager of JSU-PSU Mariners Court, said some seafarers wanted to place P1,000 bets for Pacquiao, but no one took the wagers.

Ken Taxi driver Jun Secong said some drivers of the taxi company placed bets between P500 and P1,000 for Pacquiao with fellow drivers.

Boxing Coach Edito “Ala” Villamor of ALA stable said he believed Pacquiao would win because he had fought Bradley twice and knew his style. RC