No one took responsibility in hearing
By: Karlos Manlupig - Correspondent / @kmanlupigINQ
Inquirer Mindanao / 12:20 AM April 08, 2016 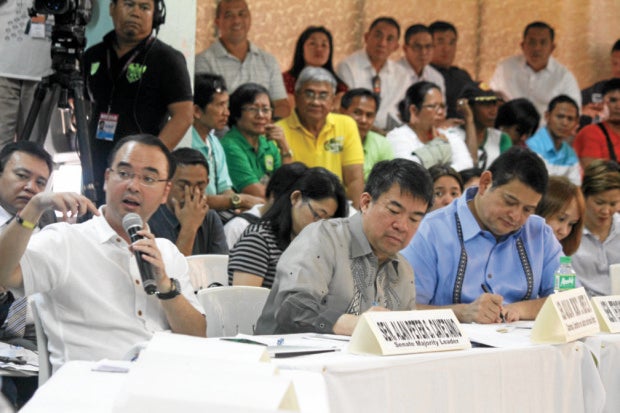 DAVAO CITY—Who ordered the dispersal of protesting farmers who barricaded the national highway in Kidapawan City on April 1?

Local government and police officials summoned to a fact-finding hearing by the Senate committee on justice and human rights on Thursday did not directly admit responsibility for the bloody dispersal that killed three farmers and injured more than 100 others, including policemen.

North Cotabato Gov. Emmylou Taliño-Mendoza said she did not order the dispersal. Mendoza said she was in constant consultation with local police officials and was told that they noticed a decrease in the number of protesters.

“I asked how many were left and the police said 2,000. I responded by saying [the number was] still [high],” Mendoza said, explaining she was reluctant to  disperse the farmers   because she had no experience in police enforcement.

She said the North Cotabato provincial police director, Supt. Alexander Tagum, asserted that it was a matter of “police action” to open the highway.

“I received the order from my regional director,” Tagum said, passing the microphone to his superior, Chief Supt. Noel Armilla, the regional police director.

Armilla said the incident was closely monitored by Philippine National Police  Director General Ricardo Marquez, whose instruction was to ensure that his office was informed about the situation regularly.

He said the crisis committee formed by the local government and the police was in command, but its action was based on the officials’ judgment call.

“My guidance to Tagum was to clear the highway,” Armilla.

But in an interview with the Inquirer, Armilla said the decision to disperse the crowd was “Tagum’s and Tagum’s alone.”

“All members of the civil disturbance management (CDM) team do not have firearms,” Tagum said, adding that those who were armed were members of the security team, which included the SWAT team.

Tagum said the SWAT were positioned far from the frontline, earning jeers from farmers during the hearing. The farmers said heavily armed policemen were positioned near fire trucks and pursued the protesters while firing their weapons.

Police officials said the presence of armed policemen in protests was covered by their manuals and was not illegal. “Carrying of firearms is allowed as a security component of the CDM,” Tagum said.

But Cayetano debunked this by citing the Public Assembly Act of 1985, which states that no police personnel is allowed to carry firearms in protests. “I won’t argue with you but your legal officer just agreed with me that it is not allowed by [Batas Pambansa Bilang] 880,” he said.

Tagum retorted that it is only justified for the SWAT to respond because the protesters fought back and overran their position.

“Understand that there is already an imminent death of my police comrade. That is when the judgment call was made by the SWAT officers,” the officer said.

Tagum said they had received intelligence reports that the farmers would stage the protest with the support of the New People’s Army and the Moro National Liberation Front.

Cayetano said it could be that the police brought firearms because their frame of mind was that there would be acts of rebellion.

He then slammed the PNP chief, the Department of the Interior and Local Government, and the President for their alleged silence over the incident. “The problem is your higher-ups are silent,” he said.

‘We are all victims’

Sen. Aquilino Pimentel III, the committee chair, called on the national government to release funds to help farmers affected by the prolonged drought all over the country.

“If there’s money intended for the victims of the drought, release it now,” he said. “These farmers have nothing to eat, feeling desperation as well.”

The farmers were demanding, among others, the release of 15,000 sacks of rice for the drought victims. But Mendoza said rice would be distributed in the municipal and barangay levels.

“We are all victims. El Niño is for real. It was only during the rally that I became emotional because it is not easy to prepare for a disaster. The funds are still there,” she said.

She asserted that the provincial government has taken appropriate action to mitigate the effects of the drought, but she also reminded the local government units to be prudent in using their funds.

North Cotabato has P100 million in calamity funds for 2016, of which P30 million is allocated for quick response, including cloud seeding and relief goods, Mendoza said.

“We still have 1,500 sacks of rice that we are about to pull out, but the protest came before we can do it,” she said.

She pointed out that P70 million was allocated for disaster preparedness programs, including P15 million for the stocking and prepositioning of food supplies.

“We also have  P32 million in savings from 2015 which we can also use for quick response especially for food provision,” Mendoza said.

The provincial government claimed that it had started the distribution of drought-resistant seeds and conducted medical missions thrice a week to ensure that no one is suffering from heatstroke and any heat-related illnesses.

“We dispersed animals to areas that needed livestock while we provided seeds to marshy areas where people can plant now after the water subsided,” Mendoza said. Cloud seeding was also done from Feb. 17 to April 6 while 60 sorties will be done from April to May, she reported.

Pimentel interjected asserting that in emergency and humanitarian situations like this the government, both the local and the national, should immediately act on it most especially on the release of the much needed funds and aid.

“There is money. The LGUs have started distributing it,” Mendoza said.