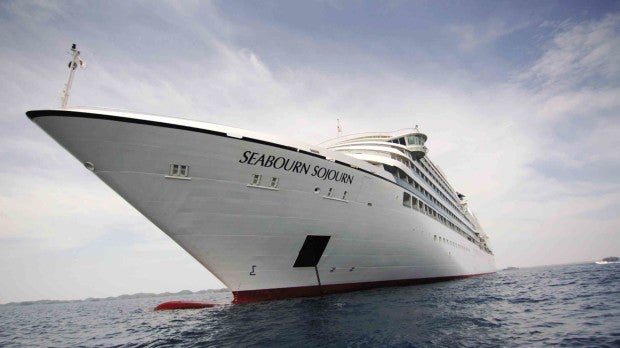 HUNDRED SIGHTS Americans and Europeans, many of them the elderly, visited the Hundred Islands of Pangasinan this week, one of the key stops of the luxury cruise ship Seabourn Sojourn. GENIVIVE NISPEROS/INQUIRER NORTHERN LUZON

ALAMINOS CITY—The Hundred Islands National Park (HINP) is fast becoming a top destination for international cruise ships, the latest of which is the luxury cruising vessel MS Seabourn Sojourn that docked on April 6 near the islands.

The Bahamas-registered cruise ship carried more than 400 tourists, most of whom toured the islands or went swimming and snorkeling in the park’s waters.

This was the second time the ship had included the HINP in its itinerary. The HINP was also the destination for cruise ships, MS Europa in 2013, MS Europa 1 in 2014, and MS Europa 2 in 2015.

It has become a cruise line attraction because it offers visitors a glimpse of Pangasinan history, has abundant island tours and safe areas for swimming, Chicano said.

The cruise companies also consider the security of the area and local government’s programs for tourists, he said.

Ship captain Hamish Elliot said it was nice to be back to the Philippines “with a new crew and new passengers who appreciate the beauty of your country and the people who are so friendly and so welcoming.”

Some of the passengers have attachments to the Philippines, like Susan Lederland whose father, Charles Tighe, was assigned to Sangley Point in Cavite province after World War II.

“He told me about the beautiful places in the Philippines,” said Lederland, who is from Texas in the United States.

Susan del Mundo, 72, said she has a “Filipino-Australian granddaughter, as my son is married to a Filipina.”

They are two of the 430 Americans and Europeans who joined the Asian cruise, which will also take them to Manila, Boracay in Aklan province, and Coron and Puerto Princesa City in Palawan province.

Alaminos Mayor Arthur Celeste said such tours boost the city’s tourism industry as the companies managing the ships pay rentals for the islands, which are closed to other tourists during the cruisers’ stay.