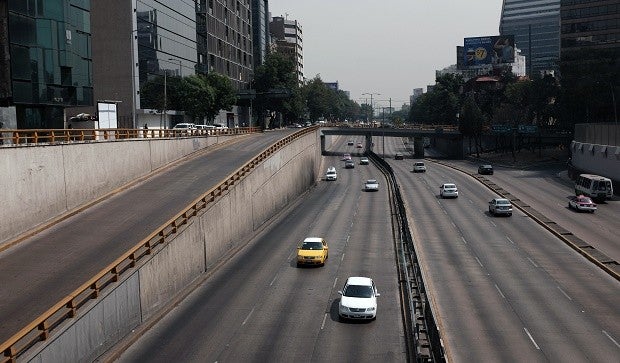 Cars drive along what would usually be a very busy thoroughfare in Mexico City, Wednesday, April 6, 2016. City authorities have barred millions of vehicles from the streets due to a pollution alert. AP

MEXICO CITY — Mexico City residents packed buses and subway trains and many walked or biked to work Wednesday as authorities barred millions of vehicles from the streets due to a pollution alert.

Under new regulations imposed after the capital recently experienced its worst air-quality crisis in over a decade, 40 percent of cars were ordered off the road after smog levels hit 1½ times acceptable limits Tuesday.

Pollution levels went down somewhat Wednesday, and the Environmental Commission of the Megalopolis said only about half that amount of vehicles would be kept off the streets Thursday.

On any given day a fifth of all cars are supposed to stay home, but that doubles during a Phase 1 alert. Until recently, newer and cleaner cars were exempt from the driving ban.

With 2 million of the capital’s cars ordered out of circulation Wednesday, fares were temporarily waved for some public transportation. Buses crawling along the central Reforma boulevard were crowded during the morning rush hour.

“Public transport is not sufficient,” said Martin Colin, a 53-year-old taxi driver, pointing to a bus jammed front-to-back with standing commuters. “They look like little sardines. The buses are full, full.”

Traffic was noticeably lighter in some parts of the sprawling capital. But Colin, whose morning fares had already taken him to diverse parts of the city, said many of the usual bottlenecks were as bad as ever.

The vehicle ban does not apply to public or private buses — something that has drawn criticism since many privately operated minibuses are notorious for belching thick black smoke.

A truck drivers’ protest against the “no circulation” rule partially blocked two major highways on the periphery of Mexico City, snarling traffic. The truckers are upset that the rule keeps them from making deliveries.

Other, unrelated political protests temporarily clogged central avenues in a city that is known for constant demonstrations.

Many residents turned to Mexico City’s expanding bicycle-share program for the commute.

Rosa Torres carpooled with friends and then used one of the loaner bikes to get the rest of the way to work. But when she arrived the bike station was full, and she had to wait behind five others for a spot to open up so she could drop the bike off.

“I’m leaving time to get from one place to another,” Torres said of the “no circulation” rules.

Luis Arturo Garcia also had to leave his car at home and was inspired to sign up for the bike-share program after his usual 10-minute commute stretched to 30.

“It affects me a lot because I work in the morning and study in the afternoon,” he said. “They’re pretty long trips, and public transportation doesn’t work for me.”

The anti-pollution measures announced last month run through the end of June, when the rainy season begins. Authorities say they are working on longer-term policies to be announced in the future.