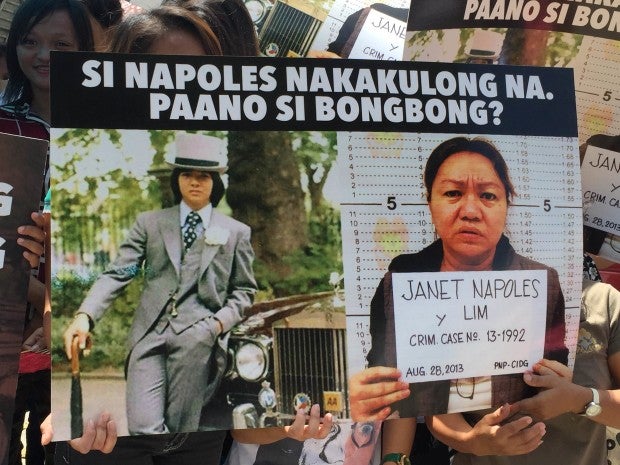 Rallyists from the IBalik ang Bilyones ng Mamamayan (iBBM) on Wednesday stage a protest action in front of the Ombudsman before filing a plunder complaint against Sen. Bongbong Marcos over his alleged role in the pork barrel scam. MARC JAYSON CAYABYAB/INQUIRER.net

A GROUP of young petitioners dressed in red bow ties trooped to the Ombudsman on Wednesday to file a plunder and graft complaint against vice presidential candidate Sen. Ferdinand “Bongbong ”Marcos Jr. over his alleged role in the pork barrel scam.

Complainant Beatrice Reyno, a UP Diliman student, said the petitioners wore red bow ties as a reference to Bongbong’s attire during yacht parties when his father imposed martial law.

Outside the Ombudsman, protesters staged a rally holding placards that juxtaposed a picture of a dapper-looking Bongbong while studying abroad, and that of a mugshot of Napoles.

Marcos supposedly released his PDAF for projects from Oct. 2011 to Jan. 2013, before the Supreme Court scrapped the pork barrel as unconstitutional.

The projects are the following:

P10 million through SDPFFI in General Nakar, Quezon with SARO issued on June 2012

P10 million through HEARTS in Bulakan, Bulacan on June 2012

P5 million through SDPFFI in Sariaya, Quezon on Oct. 2011

P10 million through CARED in Umingan, Pangasinan on Oct. 2011

The following NGOs were found by COA as bogus with shady or non-existent offices.

Santos, an alleged agent in the scam, was accused of serving as the secretary for Luy to create their own scam.

Luy’s transactions behind Napoles’ back caused their falling-out, which compelled Luy to testify against Napoles after the latter detained him for stealing.

According to the complaint, Marcos supposedly hired Santos as his consultant from January 2011 to June 2013.

The complainants cited Napoles’ May 26, 2014 affidavit submitted to the Senate Blue Ribbon committee which investigated the alleged scam.

In the affidavit, Napoles identified Santos as her contact for the projects of Sen. Marcos. Napoles also said Santos asked for a 50 percent commission from Marcos’ projects.

Santos also served as undersecretary and assistant secretary of the National Anti-Poverty Commission under the administration of former president Gloria Arroyo, who is detained for plunder over a charity funds mess.

The complaint cited the Commission on Audit which found the Marcos’ PDAF disbursements “illegal and irregular” because the projects turned out to be ghost projects with the funds not reaching its intended beneficiaries.

Sen. Marcos is seeking the vice presidency even as he is hounded by allegations of human rights abuses and extrajudicial killings perpetrated during the martial rule of his father, the late dictator Ferdinand Marcos.

Sen. Marcos has refused to apologize for his father’s regime, when the latter and his cronies plundered state coffers to accumulate ill-gotten wealth, saying that his father’s rule should be left for the historians to judge.

Sen. Marcos has been leading the vice presidential surveys in a statistical tie with front runner Sen. Francis “Chiz” Escudero.

“Marcos has always been dismissing the people’s legitimate concerns about his unexplained wealth as mere ‘politics.’ He still doesn’t understand that the Filipino youth will not sit idly by while he vies for the second highest position of the land,” David said.

Complainant Marlon Cornelio added that the plunder complaint only showed that Sen. Marcos is no different from his father.

“Marcos’ implication in the Napoles scam clearly demonstrates that Marcos is not detached from his parents’ legacy of corruption and plunder. Marcos was an accomplice in his family’s crimes during the Martial law years. He continues that legacy today,” Cornelio said.

Sen. Marcos has previously denied involvement in the pork barrel scam. He admitted hiring Santos as a consultant, but due to Santos’ failure to submit her year-end report, Marcos terminated her contract on March 2013, four months before the lid on the alleged scam blew open.

Although Napoles mentioned Marcos in her affidavit, Napoles said she has never met Marcos personally.

“The Affidavit speaks for itself. As I’ve said from day one, I never met Ms. Napoles. I never spoke to her nor did I ever have any personal dealings with her. Ms. Napoles’ Affidavit confirms this fact,” Marcos said in a statement dated May 27, 2014. JE

‘She’s the strongest:’ Drilon hoping Robredo will run for president