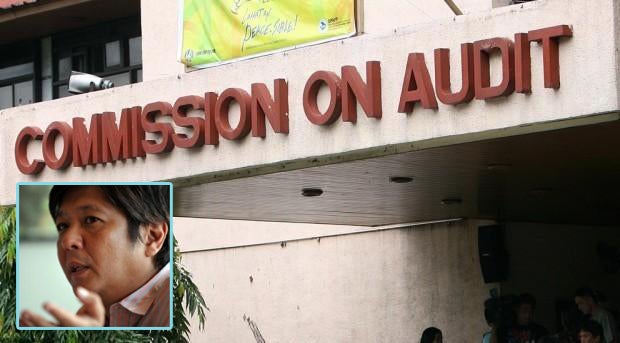 The Commission on Audit has disapproved for being “illegal and irregular” the P10 million channeled by Sen. Ferdinand “Bongbong” Marcos Jr. (inset) to a livelihood project in Nakar town, Quezon province, through a foundation headed by pork barrel scam whistle-blower Benhur Luy.

MANILA, Philippines—The Commission on Audit (COA) has disapproved for being “illegal and irregular” the P10 million channeled by Sen. Ferdinand “Bongbong” Marcos Jr. to a livelihood project in Nakar town, Quezon province, through a foundation headed by pork barrel scam whistle-blower Benhur Luy.

A notice of disallowance was issued by COA audit team leader Romeo B. Limara and supervising auditor Wilhelmina R. Cabuhat to Nakar Mayor Leovegildo R. Ruzol on June 30, ordering the return of Marcos’ P10 million, which was drawn from the Priority Development Assistance Fund (PDAF) and transferred to Luy’s Social Development Program for Farmers Foundation Inc. (SDPFFI) for the implementation of a project called “organic farming for high value crops.”

The COA said that SDPFFI’s physical and legal existence was “questionable” as its address on its local government and tax registration certificates was a residential house at South City Homes in Biñan town, Laguna province (the same village where Napoles lived before she moved to Ayala Alabang).

SDPFFI is one of the bogus foundations associated with businesswoman Janet Lim-Napoles, who has been charged with plunder and graft for allegedly conspiring with Senators Juan Ponce Enrile, Bong Revilla Jr. and Jinggoy Estrada to embezzle P1.7 billion of their PDAF allocations from 2004 to 2010.

Based on records posted on the Department of Budget and Management (DBM) website, the P10-million allocation for Nakar was part of the P65 million Marcos earmarked for towns from his 2012 PDAF allocations.

Marcos did not respond to the Inquirer’s request for comment.

In May, the Inquirer published a report about Luy’s files that detailed the transactions between Napoles, the alleged brains behind the P10-billion pork barrel scam, with 15 incumbent senators and 10 former senators from 2002 to 2012.

Commenting on that report, Marcos denied involvement in Napoles’ activities.

“The transaction amounting to P10 million is being disallowed as this was undertaken without due regard to existing laws and regulations. The implementation of the projects was not undertaken by the municipality but instead by SDPFFI endorsed by the legislators in spite of the absence of any appropriation law,” Limara and Cabuhat said in their report, a copy of which was obtained by the Inquirer.

“Procurement was not done through competitive bidding, as the funds were just transferred to the SDPFFI, [which] undertook the actual procurement of farm inputs, hence, there was nothing to post (on Philgeps or Philippine Government Electronic Procurement System) such as invitation to bid, award and date of completion,” the report said.

Aside from Marcos and Luy, the other people found liable in the unlawful deal were Ruzol (for approving the release of funds to SDPFFI without validating the foundation’s capability to undertake the project); DBM Director IV Julian Li Pacificador Jr. (for issuing the special allotment release order and notice of cash allocation without following the budget release guidelines); Nakar Municipal Accountant Orlando P. Ungriano (for certifying that the expenses were fully documented); and TNU Trading proprietor Nathaniel U. Tan.

TNU is believed to be also owned by Napoles.

A COA special audit on pork barrel fund disbursements from 2007 to 2009 showed that SDPFFI cornered P585.39 million in pork funds, the biggest among 82 foundations.

Marcos was not among the senators named by Napoles as her pork barrel partners in her “tell-all” affidavit submitted to the Department of Justice.

But Marcos’ name appeared in the detailed ledger of Luy stored in the whistle-blower’s  digital files.

Marcos has repeatedly denied having endorsed any Napoles foundation as a recipient of his pork barrel funds.

Napoles had a falling out with Luy and she had him detained in December 2012 on suspicions that Luy had been making pork barrel transactions in connivance with the senior members of senators’ staff behind her back.

Luy was rescued by the National Bureau of Investigation and he brought serious detention charges against Napoles, a clash that led to his exposure of Napoles’ pork barrel racket.–With a report from TJ Burgonio