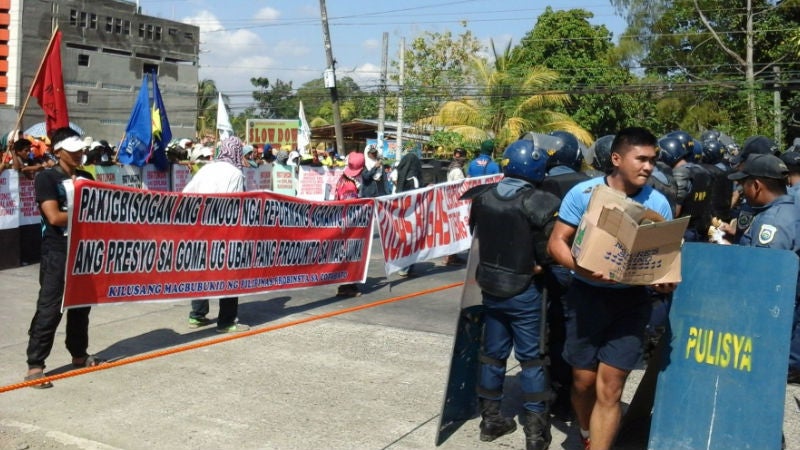 Demonstrators from various towns in North Cotabato face members of the PNP at the national highway in KIdapawan City on Wednesday. An estimated 6000 protesters blocked the highway which caused traffic to ground to a halt between the city and the areas of Davao and Cotabato. (Williamor A. Magbanua)

DROUGHT-HIT farmers who had implored the government for aid would have a chance to speak before the Senate on Thursday as it looks into the violent dispersal of their protest action that led to three deaths.

The Senate committee on justice and human rights will hold the hearing at the University of Southeastern Philippines in Davao City.

Sen. Aquilino Pimentel III, the committee chair, said the venue was chosen as it was relatively near Kidapawan City, the site of the farmers’ protest and dispersal. The venue would make it easier for the farmers to show up at the probe, he said.

Some 6,000 farmers took to the streets in Kidapawan, North Cotabato province, on April 1 to protest what they said was the government’s failure to provide relief to those suffering from the devastating effects of El Niño, which has destroyed their crops and starved their families.

Reports say police opened fire on the protesters during the mass action. Police said though that one of the dead protesters tested positive for powder burns.

“Some of the invited resource speakers belong to the protesting farmers, who are too injured to travel all the way to Manila,” Pimentel said.

Senators Teofisto Guingona III and Alan Peter Cayetano have confirmed their attendance at the inquiry.

“In the Senate hearing, we will listen to all parties present,” said Cayetano. “But most important, we hope to get to the bottom of this issue and render justice to all the victims of this unnecessary use of violence.”

The Department of the Interior and Local Government (DILG), which supervises the Philippine National Police, is also conducting a probe.

Interior Secretary Mel Senen Sarmiento said he had ordered the creation of two fact-finding panels that would investigate state forces.

The first will be under the National Police Commission, which Sarmiento heads, which will investigate the PNP actions during the dispersal.

The second, under the DILG Bureau of Local Government Supervision, will “look at the measures taken by the concerned LGUs in addressing the El Niño problem in their area of responsibility.”

On Tuesday, the PNP also announced the creation of an internal fact-finding team on the Kidapawan clash.

“The PNP’s policy is to be transparent. We don’t tolerate our colleagues if they themselves violated the rules and regulations. If the investigation proves that the police erred, they will be punished,” PNP spokesperson Chief Supt. Wilben Mayor said at a press briefing in Camp Crame.

The PNP fact-finding team will be headed by the chief for integrated police operations of the Western Mindanao police, Police Director Isagani Nerez.

“The Commission on Human Rights (CHR), likewise, is conducting its own investigation. My only appeal to the CHR is to look not only at the rights of the ralliers, but also the police, who also have rights,” Sarmiento said.

Vice presidential candidate Francis Escudero said the investigation of the bloody dispersal should not be left alone to the PNP. He said a combined team of the Department of Justice, CHR and National Bureau of Investigation should conduct an independent probe.

The CHR on Tuesday asked the public to refrain from making any “hasty and haphazard generalizations, conjectures and incomplete claims” about the violent police dispersal of the farmers’ rally.

CHR Chair Jose Luis Martin Gascon made the appeal in a statement, noting that the commission had launched its own investigation of the Kidapawan incident and was still in the middle of gathering information.

In Iba, Zambales province, President Aquino on Tuesday kept silent on the bloody dispersal of the farmers, as Malacañang insisted that the Aquino administration had been “successful” in mitigating the impact of the El Niño phenomenon.

Over the weekend, Presidential Communications Undersecretary Manolo Quezon III said the President would likely not speak on the matter until he received the full investigation report on the incident and was satisfied with the explanation given to him.

Escudero is urging Mr. Aquino to end his silence.

“If he is campaigning for his candidate and he can speak for him, there is no reason why he should not speak (on the issue) even though they are not his party mates,” said Escudero at the launching of a campaign headquarters on Gorordo Avenue, Cebu City, for him and presidential hopeful Grace Poe and their senatorial candidates.

“For me, the police was clearly at fault. It was overkill because farmers were only asking for food and rice and they were given bullets. Their protest is simple: Why are those feeding us (farmers) have nothing to eat?” Escudero said.

During the Senate probe, Escudero would like to dig deep into the use of the multibillion-peso allocations for the Climate Change Fund of which El Niño, which destroyed the farmers’ crops, was covered.

Poe said the brutal treatment of farmers and protesters had no place in this day and age. She said the government made matters worse by preventing food and other aid to reach the farmers who were cooped up in the United Methodist compound a few days after the clash. She said it was also inexplicable for the police to file charges against the farmers who were the victims in the clash.

While the DILG and PNP investigations have yet to start, Sarmiento issued statements indicating that police personnel were not responsible for the shooting.

Sarmiento said two protesters did not die of gunshot wounds, but of a heat stroke, and of  head injuries “possibly from [thrown] rocks.”

He also wondered about the motive of the protest. “They were demanding rice at the front, but protesting [government anti-insurgency campaign Oplan] Bayanihan at the back,” which had nothing to do with the El Niño or the drought, he said.

Sarmiento supported the police dispersal team and defended his much-assailed decision to award the wounded police fresh after the clash.

In Olongapo City, Liberal Party (LP) standard-bearer Mar Roxas said the rally by drought-hit farmers in Kidapawan might have been instigated by politicians for their own interests.

He said he strongly condemned the bloodshed “both on the law enforcement side and on the side of the protesters.”

“What’s needed here is a comprehensive and intensive investigation into what really happened because there are reports that this rally was not organic, meaning it wasn’t the people of North Cotabato who were there,” he said.

“This may have been instigated by politicians who wanted something to happen to heighten the issue or raise their ratings,” said Roxas, a former interior secretary who once exercised administrative control over the national police.

His running mate, Leni Robredo, in a separate interview, said the officials directly involved in the operation and the dispersal of the protesters should be suspended while the investigation was ongoing.

The Camarines Sur lawmaker, taking a starkly different position from Roxas, earlier called for heads to roll after the Kidapawan incident.

“What I am asking is that in order to have an in-depth investigation, and so the public will have confidence in the findings, the people directly involved in the operation should not remain in their posts in the meantime,” Robredo said.

Fearing a “cover-up,” Kilusang Magbubukid ng Pilipinas (KMP) and human rights group Karapatan have called for a probe by a group independent from the government.

“An independent investigating body can be composed of prominent civil libertarians, Church people and academicians, among others,” KMP chair Rafael Mariano said in a statement.

Mariano noted that “farmers have learned our lessons from the Mendiola and Hacienda Luisita massacres” for which no one had been held accountable.