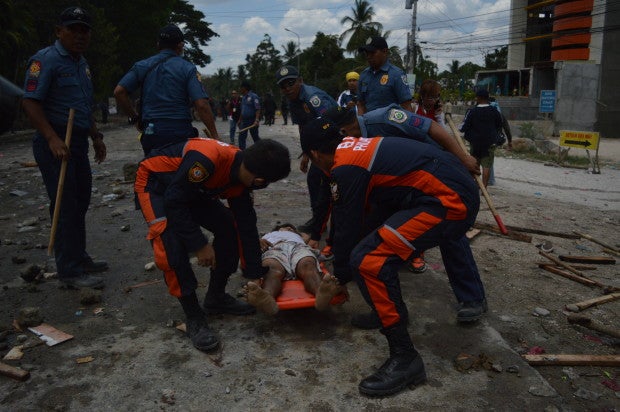 Vice President Jejomar Binay joined the other 2016 presidential candidates in condemning the bloody dispersal of farmers in Kidapawan city on Friday, adding that the farmers were only asking for rice, not bullets.

In a statement, Binay’s spokesperson Atty. Rico Quicho said the police opened fire on the farmers even though they were only asking for relief amid the drought in Mindanao.

“Vice President Jejomar C. Binay deplores the use of violence to disperse farmers in Kidapawan demanding rice from government. Bigas ang hinihingi, pero bala ang ibinigay (They were asking for rice, but were peppered with bullets),” Quicho said.

READ: 1 killed, 13 hurt after police open fire in North Cotabato farmer protest
Quicho said the attack on farmers only compelled the Vice President to address hunger through compassion and not violence.
“Hunger is a reality that must be addressed not by violence but by compassion and concrete programs to improve the lives of the poor,” Quicho said.

Police on Friday morning opened fire on 6,000 farmers who were protesting for relief and subsidies for farming communities amid a drought that struck Mindanao.

At least one farmer was killed and 13 others wounded in the violent dispersal. IDL