DAVAO CITY — A farmer was killed while at least 13 others were wounded after police forces opened fire at some 6,000 protesters in Kidapawan City on Friday morning.

The protesters were demanding relief and subsidy for farm communities affected by the dry spell.

Norma Capuyan, leader of Apo Sandawa Lumadnong Panaghiusa sa Cotabato, said that the incident happened around 10:30 on Friday morning after the police tried to disperse the protesting farmers.

“They really wanted to drive us away. They destroyed our sound system and fire water cannons against us,” Capuyan said.

Capuyan explained that the protesters decided to hold their line and this is when the firing started.

A farmer died on the spot after sustaining gunshot wounds in the foot, leg and shoulders, she added.

“We ran to a church compound and the police are now surrounding us. We cannot even bring the wounded to the hospital,” Capuyan said.

North Cotabato governor Emmylou Talino-Mendoza told the Inquirer that the violence ensued after the farmers attacked the police who were serving an order, along with social workers, to rescue minors in the barricade and to clear the highway.

“They were to rescue the children with the help of social workers. It also became a police matter because it is already an illegal assembly for their permit was only for Monday. They were given 5 minutes to vacate,” Mendoza explained. 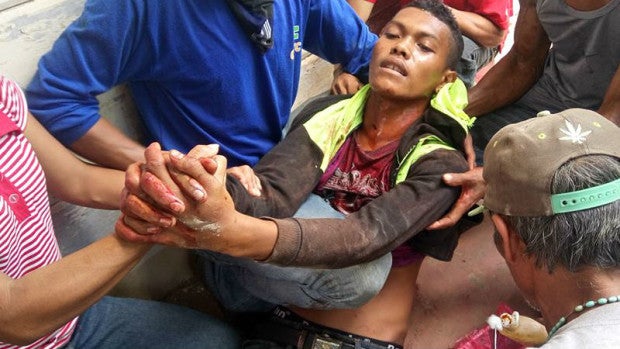 The governor asserted that the police were non-violent in performing their duties during the barricade because they were ordered to observe maximum tolerance.

“While the police were trying to rescue the children, the protesters started throwing stones at them. At least 20 cops sustained wounds from the rocks. And then a gunshot was heard and a police reportedly got hit,” Mendoza said claiming that the first shot came from the protesters.

Mendoza said that she does not want to mix the incident with politics but she noted that former political rival ex-governor Emmanuel Piñol was present in the area and had an interview claiming that Davao City mayor and presidential candidate Rodrigo Duterte will be there today.

She also added that the effort to rescue children from the barricade was prompted by the clash between suspected communist guerrillas and government forces in Makilala town on Thursday evening that led to the death of a 7-month old baby and two other minors who were hit by stray bullets and shrapnel.

“The wounded cops are now being treated at the hospital while we are also giving the same level of medical attention for the wounded protesters.

Some 6,000 farmers have been protesting what they said was the government’s inaction on their plight and demanded rice rations, claiming the El Nino has left them and their families with less food.

North Cotabato lost over P1 billion from the drought. CDG