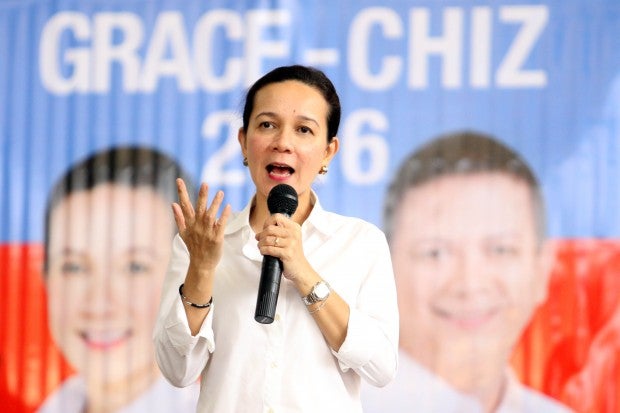 LUMBAN, Laguna—Despite maintaining her lead in the latest Pulse Asia survey, presidential bet Grace Poe recognized the need to work harder to keep pacing her rivals and ensure her victory in the May 2016 elections.

(From the bottom of my heart, I am thankful because this is no easy feat; surveys are ever-changing.)

(Right now, we are continuing to go around the country and sending out our message on the fight against poverty. I believe that is our message to our countrymen: alleviating poverty and making sure that the government is assisting the poor.)

Poe was reacting to the latest Pulse Asia Survey commissioned by ABS-CBN, which showed her as the voters’ top choice for president with 28 percent, followed by Davao City Mayor Rodrigo Duterte with 24 percent, Vice President Jejomar Binay with 23 percent, former Interior Secretary Mar Roxas with 19 percent and Senator Miriam Defensor-Santiago with two percent.

Poe though recognized that her numbers in the survey was not an assurance of her victory in the actual elections.

(As they say, no survey numbers can guarantee our victory other than the numbers during Election Day.)

Told about some observations that her lead in the survey was slim compared to what was expected after the Supreme Court allowed her to run for president, Poe said it only proved that she still has to work harder as she is facing strong opponents in the presidential race.

(Each candidate has his or her own strong suit, that’s why it is important for us to get our messages across.) IDL