Lawyer risks everything to save Christian accused of blasphemy 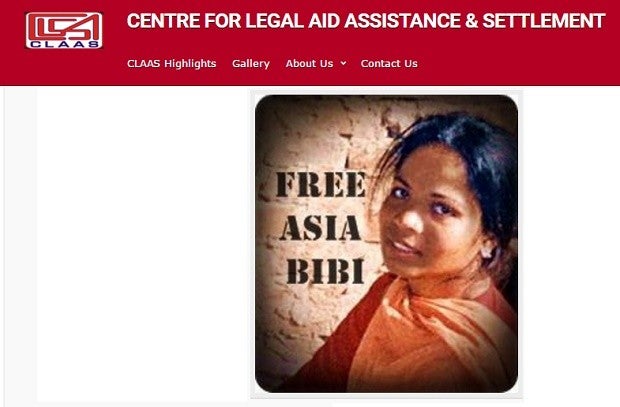 This composite photo from the website of the Centre for Legal Aid Assistance & Settlement shows a photo calling for the release of Asia Bibi, who has been sentenced to die in Pakistan for alleged blasphemy. SCREENGRAB FROM CENTRE FOR LEGAL AID ASSISTANCE & SETTLEMENT WEBSITE

LAHORE, Pakistan — As Islamist protesters turned up the pressure on the Pakistani government this week to hang Asia Bibi, a Christian mother of five convicted of blasphemy, one man is risking his own life to stand between her and the gallows.

Police guard the house in a quiet neighbourhood in Lahore where lawyer Saif-ul-Mulook lives with his daughter and wife.

They were deployed, he told AFP, “after intelligence officials said a group has carried out a recce of my office for a planned assassination”.

Mulook is not famous, but his client is.

Bibi has been on death row since 2010 — convicted for blasphemy after an argument with a Muslim woman over a bowl of water.

Her plight has prompted prayers from the Vatican and calls from hardliners in Pakistan for her to be hanged, repeated this week by Islamist protesters in a stand-off with security forces in the capital.

To stay alive long enough to defend her, Mulook, who is Muslim, says he lives in the shadows, moving only between his office and home.

“We don’t go out to meet relatives or friends. They don’t come here to meet us.”

The danger is real. Blasphemy is a hugely sensitive issue in Muslim-majority Pakistan, where even unproven allegations can stir mobs and violence.

Rights groups say the legislation is often hijacked for personal vendettas, with minorities largely the target.

A Christian couple was lynched then burnt in a kiln in Punjab in 2014 after being falsely accused of desecrating the Quran, while Bibi was moved to solitary confinement last year over fears of vigilantes.

“When I took (her) case, my fellow lawyers said ‘You have hammered the last nail into your coffin,'” Mulook said.

But when Bibi became Mulook’s client in 2014 he was no stranger to being a target: he was also the special prosecutor in the high-profile murder case of Punjab governor Salman Taseer.

Taseer was gunned down by his bodyguard, Mumtaz Qadri, in Islamabad in 2011 over his call for blasphemy law reform.

The brazen killing saw Qadri feted as a hero by Islamists. Mulook was the only lawyer willing to risk their wrath to send the former police bodyguard to the gallows.

The two cases are linked: part of Taseer’s stance on the blasphemy law had been his call to see Bibi released.

Islamabad’s decision to execute Qadri on February 29 brought tens of thousands of people into the streets chanting slogans supporting the laws — and calling for Bibi to be hanged.

On Sunday, Qadri supporters marched on the capital amid violent clashes with police and staged a four-day sit-in.

They vowed they were ready to die unless the government meets their demands, including Bibi’s execution — though they dispersed Wednesday peacefully.

But the day of Qadri’s funeral he had an important meeting in Islamabad.

Driving along the historic Grand Trunk Road towards the capital he found himself caught in a wave of hundreds of Qadri supporters heading for the funeral.

It was a terrifying moment.

“If they had discovered who I was they would have attacked me like vultures, making pieces of me,” he said.

Qadri is a “goldmine” for the mullahs, Mulook said.

“They were losing their space in society so they were declaring each other infidels. But now they have found one common element… Mumtaz Qadri.”

Now his colleagues look at him with distaste when he walks in the courtroom.

“Friends told me that you are crazy,” he said. “They said I was being an enemy to my own family.”

Pakistan has 17 people on death row for blasphemy, including Bibi, but has not executed anyone yet.

Mulook sees little hope, and warns the “Qadri phenomenon” will only grow.

He takes a fatalistic view towards his position: to give up the fight for Bibi’s life would be cowardly, and anyway he had already condemned himself when he successfully prosecuted Qadri.

“I said to myself, look, you have already done the damage … It is time to stand up for this poor woman.”

Meanwhile Bibi, whom he visited recently in prison in the central city of Multan, is in good spirits, he said.

“I spent two and half hours with her… I saw her eyes shining and I can say that she is hopeful, very hopeful.”