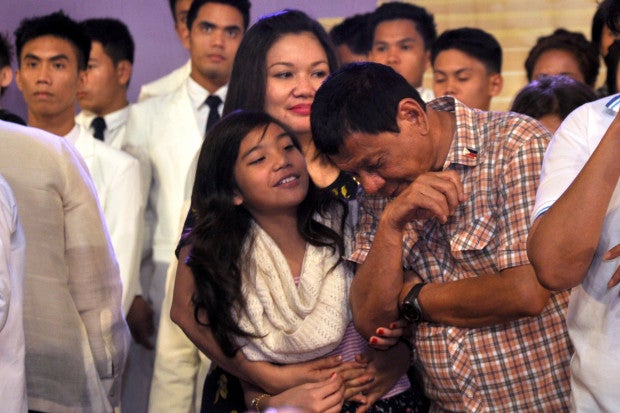 CATANAUAN, Quezon—Davao City Mayor Rodrigo Duterte said he would find a way to immediately distribute the coco levy funds to farmers if he wins the presidency.

“As President, I will ask the Congress and the Supreme Court to find a way to immediately distribute the coco levy funds to farmers. Period. You choose, I will get the money and distribute it myself or it will be you,” Duterte told small coconut farmers in a campaign sortie here on Wednesday afternoon.

In a bold pronouncement, Duterte and his running mate Senate Majority Leader Alan Peter Cayetano told coconut farmers that the multibillion-peso coco levy funds will be distributed to the farmers within 100 days.

“We have to wait until July for the Congress to convene. We need the Congress to [pass a bill for the distribution],” Cayetano told Catanauan farmers, adding that Duterte’s mother was supposed to be a beneficiary of the coco levy funds.

“You know you are not the only victims of the coco levy scam. My mother passed away without this being resolved,” Duterte said.

Catanauan, which Duterte and Cayetano reached aboard rented helicopters, is a municipality in Quezon located 220 kilometers south of Manila and known for its coconut production.

During the Marcos years, coconut farmers across the country were taxed by the government to build a fund ostensibly to be used for the development of the coconut industry. The money, which reportedly ballooned to P150 billion in assets benefited Marcos’ cronies.

During the dialogue, farmers told the two candidates how the Aquino government has been evading their calls to distribute the P71-billion coco levy funds.

In 2014, the Supreme Court ruled that the P71 billion in coco levy funds from Eduardo “Danding” Cojuangco’s San Miguel Corp. should be used to benefit the coconut farmers and develop the coconut industry.

In March 2015, President Aquino issued Executive Orders No. 179 and 180 privatizing the coco levy funds, but his executive orders were suspended by the Supreme Court.