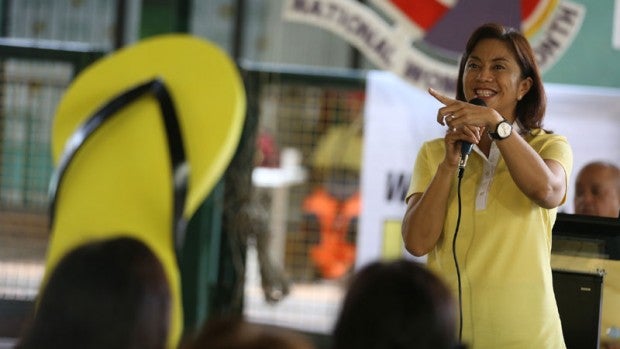 In a candid moment, Liberal Party (LP) vice presidential candidate Leni Robredo admitted to college graduates in Quezon province that she flunked the bar exams on her first try in 1992.

The Camarines Sur congresswoman used her experience of failing the bar to drive home her message during Tuesday’s commencement rites at Sacred Heart College in Lucena City: “Don’t lose hope. Learn to rise from failures.”

“I studied to be a lawyer while I was raising my little girls,” said Robredo, widow of Interior Secretary Jesse Robredo, with whom she has three daughters, Aika, Tricia and Jillian.

Robredo said she was both a working mother and wife to the then mayor of Naga City, among her other roles.

“I shuttled between Manila and Naga City, while reviewing for the bar. It was a very difficult time. I was juggling my responsibilities as a mother, a teacher and a student,” she told the school’s batch of 2016.

“When the bar results came in, I did not pass,” said Robredo, an economics graduate of the University of the Philippines, who took up law at the privately run University of Nueva Caceres in Naga City.

She told the graduates that her failure had fueled her desire to recover from the stumble. “I strove to recover. And on the second try, I finally became a lawyer, right on my birthday,” said the 51-year-old Robredo.

After passing the bar exams, Robredo said, she resolved to help the poor and marginalized sectors that could not afford legal services in Naga City.

She joined the Public Attorney’s Office in her hometown, helping poor litigants defend their rights in court and later moved to Sentro ng Alternatibong Lingap Panligal, a nongovernment organization providing free legal aid to the needy.

Robredo was thrust into politics after Jesse Robredo, a Ramon Magsaysay laureate, died in a plane crash in 2012. Answering a clamor from her province mates, she ran for representative of a Camarines Sur district and won.

As a neophyte lawmaker, Robredo has authored or coauthored three laws: the extension of the corporate life of the Philippine Railways Corp., the Tax Incentives Management and Transparency Act and the Sangguniang Kabataan Reform Act.

Other bills she filed include the barangay reform bill, people’s participation in budget deliberation bill, people empowerment bill of 2014, full disclosure bill and the freedom of information bill.

Initially reluctant to seek higher office, she was persuaded by President Aquino and other administration stalwarts to be the running mate of LP standard-bearer Mar Roxas late last year. Her campaign has since focused on promoting transparency in government, women empowerment and inclusive growth.

In the latest voter preference polls, Robredo remains in third place but is closing the gap with the two front-runners, Senators Ferdinand Marcos Jr. and Francis Escudero. TVJ

‘Almost there’ — Leni Robredo over jump in latest SWS poll

LOOK: Fidel Ramos wants Robredo to be the next Vice President

FVR: Support for Leni Robredo ‘sincerely given,’ no strings attached