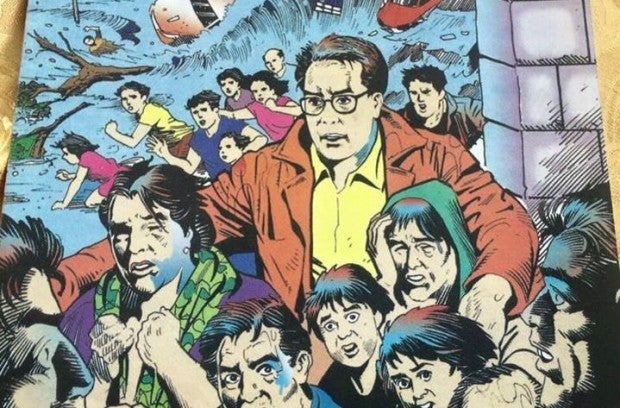 A Church official scored the now-viral comic book of Liberal Party standard-bearer Manuel “Mar” Roxas II that depicted the former Interior secretary as a hero during the height of Supertyphoon “Yolanda” in Eastern Visayas as “shameful” and “unacceptable” propaganda.

In a Catholic Bishops’ Conference of the Philippines (CBCP) News report on Tuesday, Caritas Philippines Executive Secretary Fr. Edwin Gariguez said that his conscience has urged him to call out the “hypocritical” claims regarding Roxas’ performance in the aftermath of the supertyphoon.

“In conscience, I need to belie this hypocritical claim of Mar Roxas claiming to be a hero in the emergency response,” Gariguez was quoted as saying.

He also called other candidates to adhere to truth and decency while on the campaign trail.

“We need to bring truth and decency in our electoral process. A call that I dare to make to all candidates,” the priest added.

READ: CBCP issues guidelines to Catholic voters ahead of 2016 polls

Caritas Philippines is the humanitarian and advocacy arm of Philippine bishops.

The comic book, titled “Sa Gitna ng Unos” (In the Eye of the Storm), drew flak after it showed Roxas in a heroic light during Yolanda’s aftermath—amid criticisms that the Aquino government was slow in its response to the calamity.

On Tuesday, Roxas said that the scenes described in the comic book were accurate, including the part where it said that he almost lost his life saving other people at the height of the storm.

“I thank our supporters for making [this comic book] and explaining what really happened [during Yolanda],” he said.
The comic book, which was supposedly made by his supporters without Roxas’ knowledge, provided details on Roxas’ personal and public lives, culminating to the endorsement of the President for his presidential run. CDG