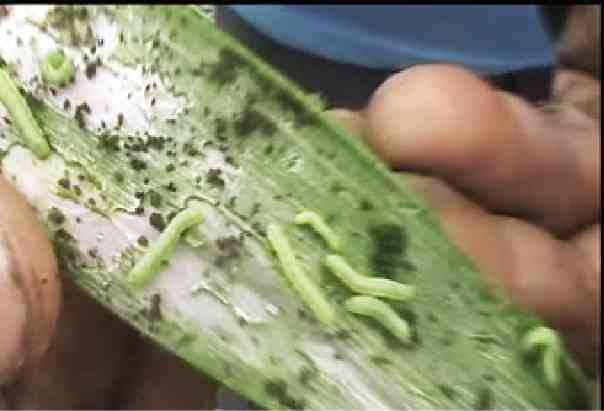 STO. DOMINGO, Nueva Ecija—Farmers Hilario Ulep and Danny Returban of Bongabon town endure the heat of the sun as they manually pluck army worms from onion leaves. They work hard to contain the infestation of their crops, which are due for harvest next month.

“We need to save some of our crops so we can earn back our investments,” Returban said.

The infestation has almost doubled the cost of their farm inputs this season. Under normal conditions, farmers spend from P80,000 to P100,000 worth of inputs for each hectare of onion farms.

Called “pangunguto” (lice picking), removing army worms by hand was one of the steps recommended by government agriculturists.

About a thousand farmers in Nueva Ecija were affected by the worm attack that started in February.

As of March 22, 389 hectares of onion farms had been destroyed by army worms, while 358 ha were damaged, according to Serafin Santos, provincial agriculturist. He said farmers were discouraged from using too much chemical in fighting the worms.

Sto. Domingo Mayor Leonido de Guzman Jr. said a state of calamity had been declared in the town covering infested farms in the villages of Dolores, Concepcion, San Francisco, San Agustin and San Fabian. The declaration allows the municipal government to access funds for farms which suffered P125,533,750 in damage, he said.

Santos said farmers in the affected areas delayed planting due to the effects of typhoons toward the end of 2015.

Ulep and Returban prefer the hard work of manually removing the worms, fearing that a supply glut could encourage massive onion importation by people taking advantage of the calamity.

“We may not be able to pay our loans if the markets are flooded [with imported onions],” Ulep said.

At least 170 import permits issued by the Bureau of Plant Industry (BPI) in February are now being held by certain businessmen, reports said.

De Guzman said the impact of the worm attacks does not warrant importation to make up for the lost onion supply. “The losses are not even 10 percent of the 9,000 ha of onion farms in Nueva Ecija,” Santos said.

Lucena Ceña, Bongabon agriculturist, said the infested farms in the town were only part of 3,295 ha planted to onion this season.

“Bongabon farms suffered three storms so we urge importers not to flood us with foreign onions because our farmers would not be able to earn from their produce,” Ceña said.