Bongbong: I won’t be a spare tire as VP 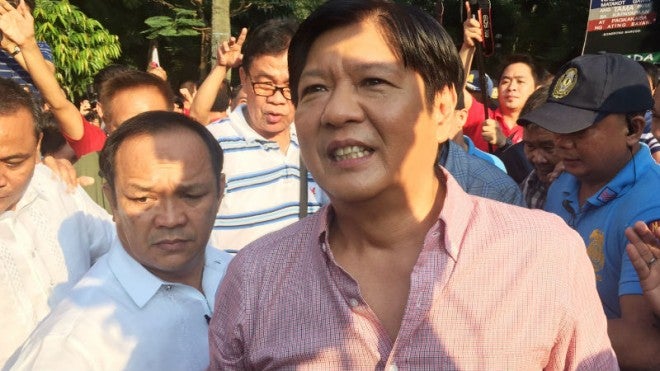 OLONGAPO CITY—Should he win in the May 9 elections, vice presidential candidate Sen. Ferdinand “Bongbong” Marcos Jr. said he would not be a “spare tire” and seek a Cabinet post that would help him fulfill his promises to create jobs and raise business-driven infrastructure.

“I will go to the [new] President to say that ‘I am ready to work with you’ and forge a partnership for the betterment of the Philippines,” Marcos said at the Radyo Inquirer forum held at the Rizal Triangle Multipurpose Center here on Tuesday.

Marcos was responding to the question of Jake Maderazo, Radyo Inquirer station manager and one of the panelists at the forum.

“I will not be a spare tire. A Vice President has his own mandate from the public,” Marcos said.

Part of the responsibilities of a Vice President is “to be prepared to replace the President” if something happens to the leader, he said.

He said, however, that a Vice President should not aim to be a President’s replacement.

‘Destiny has plans for me’

“I believe that being a President is a destiny and destiny has other plans for me in the Philippine elections,” Marcos said.

He said he would like to get the Department of Labor and Employment portfolio since the labor sector is facing a lot of challenges.

“About 5,000 Filipinos leave the country every day to work as OFWs (Overseas Filipino Workers). That’s how serious our problem of lack of jobs in the country,” he said.

He said that he would work to eliminate the contractualization of workers, noting that the workforce needs “security of tenure.”

He said he would also strengthen partnership between the government and private sector to generate more jobs and improve the economy.

“I will push for creating business-driven infrastructures by building not only roads but also training centers and more classrooms to prepare our graduates for their careers,” he said.