NGO teams up with DOH to get rehab patients hooked on drawing
By: Annelle Tayao-Juego - Reporter / @neltayao
Philippine Daily Inquirer / 12:29 AM March 27, 2016 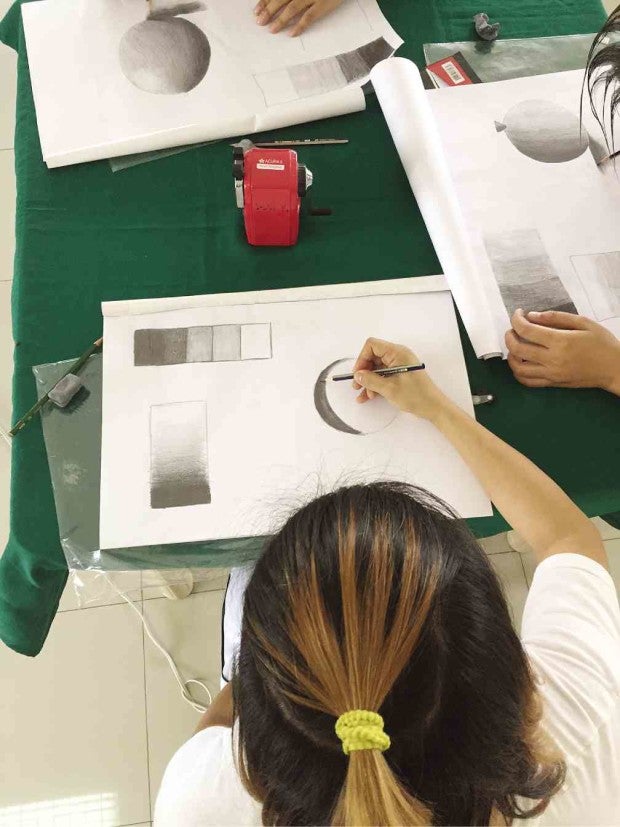 “Lisa,” a former drug addict and dealer, says she uses art to communicate with her 4-year-old son whom she has not seen for some time. ANNELLE TAYAO

A small group of women in uniform white shorts and shirts with name tags sat at a table, hunched over sketchbooks as they worked on improving their drawing skills in a nondescript room in Taguig City.

The scene looked like a typical art class, complete with a long-haired instructor going around inspecting his students’ work, except that it was not.

The women were patients of the Department of Health’s Treatment and Rehabilitation Center (DOH-TRC) compound at Camp Bagong Diwa in Bicutan, attending an art therapy program designed to become one of their emotional outlets as they undergo treatment for substance abuse.

While using art as therapy is not a new approach in addressing abuse, the program in DOH-TRC is the first of its kind for the facility. The program is headed by Be Healed Foundation, a nongovernment organization established by Jerika Ejercito,  daughter of Manila Mayor Joseph Estrada, which helps women overcome abuse and mental disorder.

Aside from being therapeutic, the art lessons serve one other purpose for one of the students: Lisa, (not her real name), a former methamphetamine hydrochloride or “shabu” user and dealer. She uses what she learns to bond with her 4-year-old son whom she doesn’t get to see during her stay in the facility as young children aren’t allowed to visit.

“During visits, my son sends me cards with drawings and messages like ‘I love you very much, Nanay (mother),’” said the 30-year-old single parent. “So I do the same for him. That’s how we communicate.”

Lisa said she was almost unable to join the art program since Be Healed Foundation wanted participants who would be able to finish the four-month course.  The DOH-TRC’s rehabilitation program takes at least six months to complete so the foundation wanted patients whose stay was, at most, two months. Lisa has just over a month to go.

“But I insisted [on joining]. Even if I would already be let out, I said I would still continue [with the art program],” she said.

Art as a release

Lisa initially wanted take up Fine Arts in college but was dissuaded by her parents (“You won’t make any money with that degree,” they told me). She recalled that even during her darkest days as a druggie, she still somewhat resorted to art as a release.

“I would slash my wrists and use my own blood to paint sad faces on my bedroom wall,” she said. “[In hindsight,] I guess I was just really screaming for attention.”

For painter Jay Viriña who is leading Be Healed’s art therapy sessions, the experience is a first for him.

“It’s different,” said Viriña. “I get to awaken the artists in them while being part of their healing process.”

The ages of patients participating in the art therapy program range from the 20s to 60s, said Be Healed Foundation general manager Alex Santos. They are taught the basics first before they gradually move on to full-blown painting.

At the end of the course, the patient-artists get to exhibit their work. Half of the proceeds will be divided among them while the rest goes to the foundation so that it can continue the program, Santos said.

More than being an emotional outlet, Santos said the program would help the foundation and the DOH-TRC with a comparative study of patients’ behaviors before and after art therapy. One thing they are looking for is the therapy’s impact on patients with  mental disorder, usually as a result of drug abuse.

A study done in 2010 by Dr. Jose Bienvenido Leabres, the DOH-TRC’s Medical Services Section chief, showed that among the facility’s patients, many suffered from chronic depressive moods.

“It’s not necessarily major [depressive disorder],” said Leabres, who specializes in addiction medicine. “So you can place a patient under further evaluation and find out what’s causing the depressive mood.”

The art program, Leabres said, would help the center in pinpointing those with underlying mental disorders. “For example, when you’re depressed, your choice of colors could be dark and gloomy. If you’re on the manic side, you could paint with extremely bright colors. So whatever is going on inside may be expressed through art, and we can identify and address it.”

Leabres zeroed in on depression because of its importance in the recovery of victims of substance abuse. “People go into substance abuse because of all kinds of factors—personal experiences, moods, peer pressure. All of these factors put together could also cause one to go into depression. If you fail to detect the depression, the rehabilitation process for substance abuse will most likely fail,” he said.

While the art therapy project is still in its startup phase, the DOH-TRC through Leabres is constantly working with Be Healed to come up with a final program for all of the center’s 1,300 patients. “There are studies that show how art therapy really works for substance abuse victims, especially when taken together with psychotherapy, drug rehabilitation. It can really help someone with their dilemma,” said Leabres.

“Based on the few sessions that we’ve had, there have been very positive outcomes. We want to repeat the program a few more times before expanding it to the whole center, and [possibly] to other government rehab facilities,” he added.

Lisa, who was also diagnosed with borderline personality disorder and battled a gambling problem, has already expressed interest in joining Be Healed as a volunteer once she gets out. Depending on her progress, she could be released next month, since six months is the minimum required stay inside the DOH-TRC. The longest is one year.

“I’ve talked to [Ejercito], and she said she would definitely keep me in mind,” Lisa said. It was her ex-boyfriend’s death due to heart enlargement caused by substance abuse that served as a wake-up call for her to get her act together.

“I don’t want to add another month to my program,” said Lisa. “I want to be with my family.”