LINGAYEN, Pangasinan—Gov. Amado Espino Jr. on Wednesday said he was not bothered about the hold departure order (HDO) the Sandiganbayan had issued against him, saying he had no plans to leave the country. In a text message to the Inquirer, Espino also said that the campaign period for local candidates would start on March 26 and that would make it more imperative for him to be in Pangasinan.

The Sandiganbayan’s sixth division issued the HDO against Espino and seven others in connection with a graft case over alleged illicit black sand mining in the province. Espino, who is serving his last term, is running for representative in the province’s fifth district against reelectionist Pangasinan Rep. Kimi Cojuangco. Espino’s son, Liga ng mga Barangay federation president Amado Espino III, is running for governor against Cojuangco’s husband, former Pangasinan Rep. Mark Cojuangco.

“I assure everyone that being a committed public servant, I remain a staunch defender of the rule of law and our democratic principles,” Espino said.

Two former Pangasinan officials have asked the Court of Appeals (CA) to reinstate them after the Office of the Ombudsman dismissed them in 2014 for their supposed role in the alleged black sand mining for which Espino was also charged.

In a March 10 petition, former Provincial Administrator Rafael Baraan and dismissed Pangasinan Housing and Urban Development officer Alvin Bigay said the Ombudsman did not have substantial proof to declare them guilty of grave misconduct for allowing a mining firm to extract magnetite from a government lot in Lingayen town. 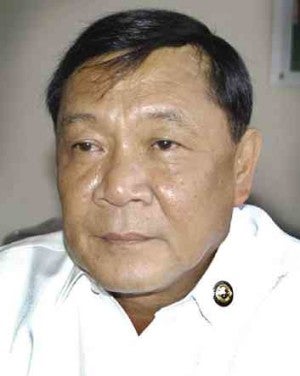 The land is being developed into a golf course.

On March 15, the Ombudsman filed separate graft charges against Baraan, Bigay and Espino for engaging in magnetite extraction and using “unqualified” contractors, a reference to mining companies, Alexandra Mining and Oil Ventures (Amovi) and Xypher Builders, Inc., which were commissioned to remove black sand from the proposed golf course area.

The Ombudsman said the mining companies were not qualified to undertake “soil remediation” as required by the ecotourism development project.

The project was also undertaken without an environmental compliance certificate (ECC) from the Department of Environment and Natural Resources, the Ombudsman said.

Baraan and Bigay informed the CA that the Ombudsman violated their constitutional right to due process because, they said, they were not properly apprised of the nature of the administrative offense for which they were found guilty.

They said Lingayen villagers, who complained about the black sand extraction, had charged them with abuse of authority. So they could not be convicted of an offense like grave misconduct for which they were not charged, they said.

Baraan and Bigay said they acted with the authority of the provincial board and were “only putting into action the directive of the board.”

They also said the Ombudsman “erroneously assumed that the ECC should have been in place before any single shovel could be thrust into the project site.”

“Nothing in the DENR administrative order requires prior acquisition of ECC before a supposedly environmentally critical project is undertaken,” they said.

“Moreover, the black magnetite sand was not extracted from the purpose of ‘economic utilization’ or conversion into ‘marketable products.’ They were removed because they inhibited the growth of flora and fauna so necessary to a golf course,” they said. Gabriel Cardinoza and Yolanda Sotelo, Inquirer Northern Luzon