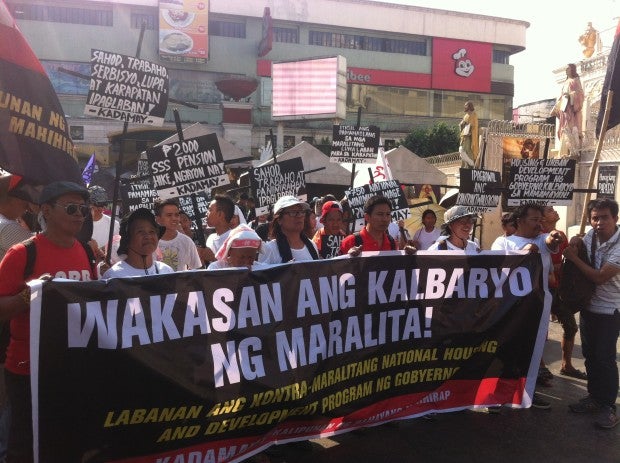 During the “Kalbaryo ng Maralita” protest in Manila, Kalipunan ng Damayang Mahihirap (Kadamay) chairperson Gloria “Ka Bea” Arellano slammed the presidential debate at the University of the Philippines Cebu, saying that “it grossly lacked any sort of concrete agenda for the urban poor.”

“We are disappointed not only by the continued attacks on urban poor communities that have once again come to the fore (Culiat and IBP Road demolitions) but also by the non-recognition of housing as a pressing issue for millions of poor Filipinos,” Arellano said.

Arellano lamented that the candidates vying for the highest position in the land devoted more time exchanging personal tirades instead of presenting solutions that would uplift the lives of Filipinos, especially the poor and homeless.

READ: Agenda of the next president: Poverty reduction

“The debate held more focus on mudslinging which benefits no one and cheapens the discourse of what Filipinos really need. All the while, our kalbaryo ravages. Millions without basic utilities, live in inhumane relocation sites and are under threat from demolitions,” she said.

“We carry the cross as a sign of protest. We will carry this burden in constant struggle for public housing to be treated as a service and not an enterprise,” Arellano added.

The group also hit the Urban Development and Housing Act (UDHA) on the 24th anniversary of its approval, saying that “the only policy groundwork it has made was to legalize, institutionalize and mechanize the demolition process and subsequent high cost housing/relocation that has been a bane for ordinary Filipinos.”

“This puts only a fraction of the urban poor population exempt from the demolitions that the UDHA permits. However, it does not mean that they are exempt from other maneuvers to drive them out of their homes. The community mortgage program among others is akin to imposing an impossibly long rope to climb for a community. Nobody ever reaches the top because the bar/price is set too high for you to fail,” Arellano said. CDG