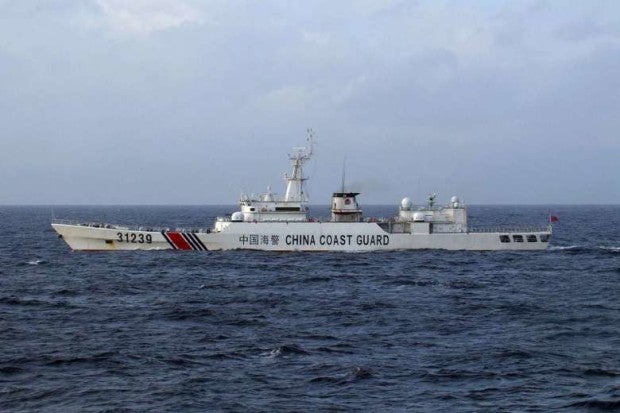 A Chinese Coast Guard boat near the disputed Senkaku/Diaoyu islands in the East China Sea. AFP

At the weekend, a China Coast Guard (CCG) ship allegedly rammed a Chinese fishing boat to pry it loose from an Indonesian patrol boat that had seized it for illegal fishing near the Natunas in what Jakarta said was its waters.

The incident has shone a spotlight on the CCG, which has been expanding its fleet and building larger vessels in recent years to help enforce China’s territorial claims.

It is estimated that the CCG has more than 200 maritime enforcement vessels, including a pair of recently built 10,000-tonne “monster” ships that are the biggest coast guard vessels in the world.

The first one was completed in 2014 and deployed last year to the East China Sea, while the second, which reportedly boasts a 76mm quick-firing main gun and has a top speed of 25 knots, was completed in January and is set to be deployed to the South China Sea.

The formation of the CCG came soon after China’s new leadership pledged in 2012 to build the country into a maritime power.

In March 2013, China announced that four of its five maritime law enforcement agencies – those overseeing maritime surveillance, fisheries administration, customs enforcement and border control – would be restructured into the CCG.

The different forces – nicknamed the “nine dragons” in China – were criticized for duplicating duties and sometimes competing for public attention and funds by challenging ships from neighboring countries.

In 2012, China also began a construction programme to add more than 30 large patrol ships and 20 patrol combatants within three years – a move that was aimed at increasing the CCG force level by 25 per cent.

They protect Chinese fishing and survey vessels and prevent other countries from encroaching into contested areas, without having to wield military force – and risk international condemnation – with “grey-hulled” navy ships.

Most CCG ships are unarmed or have relatively light weapons.

But as the latest incident with the Indonesian authorities over the weekend shows, this does not prevent skirmishes at sea.

China sent the CCG to protect an oil exploration rig that it parked in waters contested with Vietnam in 2014, using the boats to ram and fire water cannon at Vietnamese law enforcement boats.

Given the danger of clashes, China and Asean have agreed to explore Singapore’s proposal of an expanded Code for Unplanned Encounters at Sea (Cues) that includes coast guard ships, Foreign Minister Vivian Balakrishnan said earlier this month.

The Cues proposal builds on a code signed in 2014 by 21 members of the Western Pacific Naval Symposium that covers naval vessels and aircraft.

The members include China and all 10 Asean members, except Myanmar and Laos.