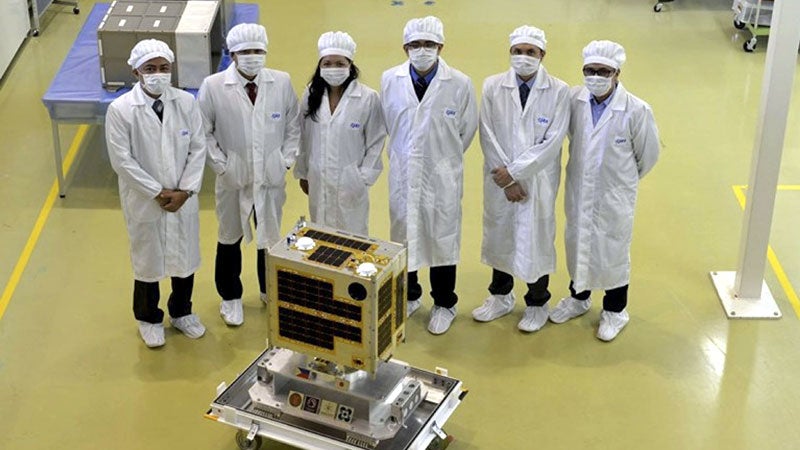 SCIENTISTS from the University of the Philippines and Department of Science and Technology officials turn over Diwata, the first Filipino codeveloped microsatellite, to their counterparts at the Japan Aerospace Exploration Agency in Tsukuba City, Japan. CONTRIBUTED PHOTO

THE PHILIPPINES is sending a third satellite into space today, taking the Filipino scientific community to new heights.

Science Secretary Mario Montejo said Diwata was part of around 3,375 kilograms of science and research, crew supplies and vehicle hardware that would be brought to the International Space Station (ISS) by Orbital ATK’s Cygnus spacecraft as part of the National Aeronautics and Space Administration’s (Nasa) fifth resupply mission to the ISS.

The spacecraft, according to Nasa’s website, is expected to arrive at the ISS on Saturday.

Montejo said the launch of the microsatellite would further cement the belief, especially in the Filipino community, “that our scientists and engineers can be at par” with their foreign counterparts.

The Philippines first had a satellite in space, the privately owned Agila 1, in 1996. It was acquired from Indonesia, which launched it from Cape Canaveral in 1991.

The second Philippine satellite was Agila 2, also for communications, privately owned and launched from Sichuan, China, in 1997. It is now called ABS-3, after Mabuhay Satellite Communications, a subsidiary of Philippine Long Distance Telephone Co.,  sold it to Bermuda-based Asia Broadcast Satellite Holdings Ltd. for P400 million in 2009.

Carlos Primo David, executive director of the Philippine Council for Industry, Energy and Emerging Technology Research and Development, said that once Diwata is aboard the ISS, it will first be housed in the Japanese Experiment Module before it will be released into orbit between April 4 and 7.

“By the time Diwata has been released into orbit, we will have full control of it. Initially, this will be controlled by our Filipino engineers who are stationed at Tohoku, Japan,” David told the Inquirer Tuesday.

He added that control of Diwata will later be transferred to the Philippine Earth Data Resources Observation (Pedro) in Subic, Zambales province, which will receive and store data sent by the satellite.

It is expected that Diwata, which will stay in orbit for around 20 months, will take an average of 3,600 high-resolution images of the Philippines daily using its four cameras.

Phil-Microsat program head Joel Marciano Jr. explained that Diwata is equipped with a high-precision telescope capable of determining the extent of damage from disasters; a space-borne multispectral imager with liquid crystal tunable filter that could monitor changes in vegetation and ocean productivity; a wide-field camera that could observe cloud patterns and weather disturbances; and a middle-field camera, an engineering payload that would be used to assist in determining the location of each image captured by the other optics.

“The whole DOST family eagerly awaits the launch of the Cygnus rocket carrying Diwata. In a few days, our satellite will be in space and soon a piece of equipment carrying our flag will be orbiting Earth taking valuable imagery of our country,” David said.

Diwata’s launch comes more than two months since Filipino scientists and DOST officials turned over the microsatellite to their counterparts at the Japan Aerospace Exploration Agency, who sent the device to Nasa after conducting final tests on its spaceworthiness.

Science Undersecretary for Research and Development Amelia Guevara and Marciano will be overseeing the launch in Florida, while David and other DOST officials will be watching the live feed of the launch at the University of the Philippines.

Montejo earlier said that through the 50-kg balikbayan-box-sized microsatellite the government would soon have at its disposal essential data on weather systems “crucial for our farmers to adjust planting methods and procedures in light of climate change.” With a report from Inquirer Research