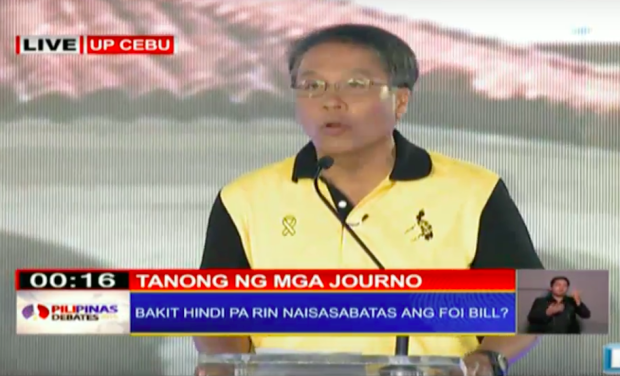 The second leg of “PiliPinas” Debates 2016 was hosted by TV5 and the Philippine Star at the University of the Philippines campus in Cebu City on Sunday.

According to Facebook Insights, Roxas was the top-performing candidate with 49 percent of unique users interacting on topics related to him.

Davao City Mayor Rodrigo Duterte was the near second at 46 percent. He was followed by independent candidate Grace Poe at 34 percent  and United Nationalists Alliance standard-bearer Jejomar Binay at 25 percent.

Sen. Miriam Defensor-Santiago, who skipped the debates for clinical testing of new anti-cancer pill, had four percent of unique users talking about her.

Meanwhile, Filipinos engaged the most in discussions on transparency and corruption.

During the debate that saw presidential rivals ganging up on Vice President Jejomar Binay on his alleged corrupt activities in Makati City and former Interior Secretary Mar Roxas being jeered with allegations on anomalous MRT contracts, 75 percent of unique Facebook users talked about transparency and corruption.

READ: Rivals gang up on Binay

In the Philippines, a total of 1.3 million people engaged in discussion on Facebook, generating 2.6 million interactions.

Facebook defines election-related conversation as “any post or comment that contains highly specific and targeted keywords or hashtags related to either the election itself, a candidate, a party, or a specific topic that might be playing a large role in the election itself.”

The social networking giant has partnered with the Commission on Elections to provide Filipinos with real-time data and insights on elections.