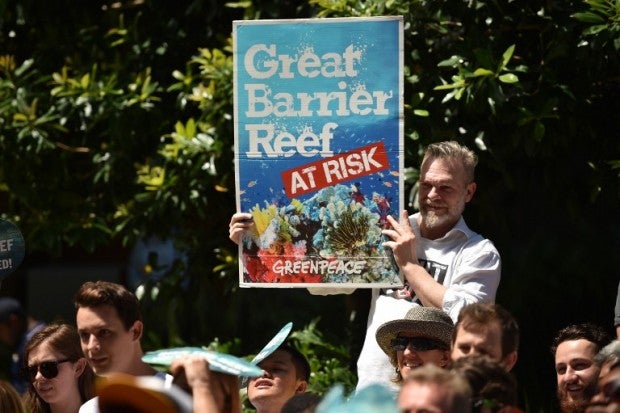 In this file photo, protesters hold banners outside the headquarters of the Commonwealth Bank in Sydney to call for the conservation of the Great Barrier Reef. AFP PHOTO

The Australian government said Sunday that corals had turned white and grey in parts of the World Heritage-listed marine park, with the bleaching “severe” in northern areas.

Environmental group WWF said large sections of coral near Lizard Island were drained of all color and fighting for survival.

“The reef can recover but we must speed up the shift to clean, renewable energy and we must build reef resilience by reducing runoff pollution from farms and land clearing,” WWF spokesperson Richard Leck said.

Corals can recover if the water temperature drops and the algae are able to recolonize them.

“The Queensland and federal governments must see this as a red alert and act accordingly.”

She called on the government to reconsider coal mining, saying the burning of the fuel was “driving climate change, warming our waters and bleaching the life and color out of our reef.”

Environment Minister Greg Hunt, who inspected the area by air on Sunday, said three-quarters of the reef was experiencing “minor to moderate bleaching.”

He said while the bleaching was nowhere near as bad as in 1998 or 2002, in the top quarter, north of Lizard Island, it was severe.

Jodie Rummer, a senior research fellow at James Cook University, said after spending 40 or so days at Lizard Island the situation was “not good at all.”

She said while the northern parts of the reef were among its most beautiful and pristine, they had also been hard hit by cyclones in recent years which had caused structural damage to the coral.

“Certain areas that are typically 100 percent coral cover — which is a really healthy reef — are almost 100 percent bleached now; so it’s quite disturbing,” she told AFP.

“And it’s quite sobering as well to think that this is the wake up call that we’re getting to take better care of our environment.”

Rummer said researchers needed more time to know the full extent of the bleaching and the damage to the reef and its marine life.

#InquirerSeven Facts that prove climate change is real, according to Al Gore