#InquirerSeven Facts that prove climate change is real, according to Al Gore 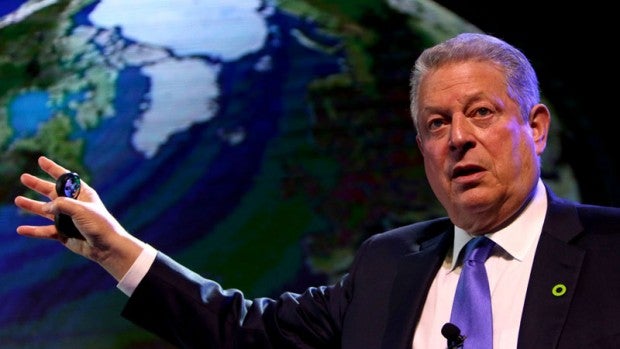 BOMB DROPPED Former US Vice President Al Gore, an environment advocate, likens the effects of climate change to the Hiroshima and Nagasaki bombings in his speech before delegates of the Climate Reality Leadership Corps Training. RICHARD A. REYES

How do you convince a room that climate change is real?

Such was the challenge former US Vice President and climate advocate Al Gore hurdled at the Philippine leg of the Climate Reality Leadership Corps training at Sofitel Plaza.

READ: Al Gore to ‘climate warriors’: We only have years to make large change

From March 14 to 16, Gore showed participants the slideshow presentation he uses when talking about climate change in conferences around the world. He also taught participants, dubbed “climate leaders,” the intricacies of his renowned two-hour presentation: Using a mix of facts, images and videos both important and “shocking.”

The attendees, dubbed “climate leaders,” could then use the facts and slideshow in their own future workshops.

Here are seven of the many statistics used by Gore to simplify the science showing why climate change is real and what factors contribute to the global phenomenon. All images are from Gore’s presentation. 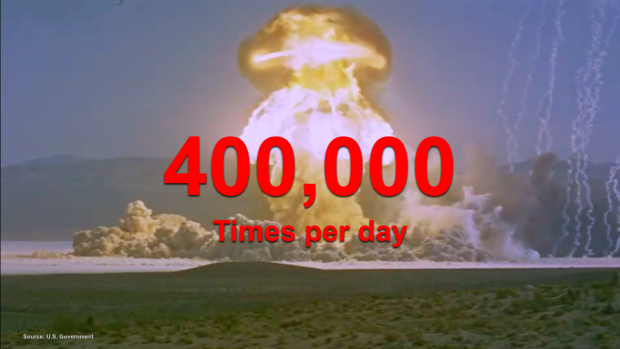 1. The energy trapped by manmade global warming pollution is now “equivalent to 400,000 exploding Hiroshima atomic bombs per day, 365 days of the year.”

Gore used the powerful metaphor right smack in the middle of his slideshow, complete with a video of an atomic bomb exploding in the background.

“I didn’t mean for it to be that loud,” he quipped during one of three times he presented to attendees and media, but perhaps he did. More than once, Gore said that he included certain slides “because it was shocking.”

The bold statement was popularly used in a 2012 TED talk by James Hansen, former director of the NASA Goddard Institute for Space Studies.

WATCH: James Hansen: Why I must speak out about climate change

2. Fourteen of the 15 hottest years on record have occurred since the year 2001.

Save for the year 1998, global land and sea temperatures have remained extremely high between 2001 and 2015, according to data from NASA. The only year not included is 2008 during the last recorded La Niña, or an ocean phenomenon wherein sea temperatures drop between 3 to 5 degrees Celsius.

The upward trend looks to be continued this 2016. January this year, Gore said, was the hottest January on record. February 2016, he added, was the 372nd consecutive month with global temperature above the 20th century average.

3. Global warming is contributing to an increased incidence of extreme weather because the environment in which all storms form has changed due to human activities.

The above statement from Kevin Trenberth of the US National Center for Atmospheric Research echoes what Gore and thousands of climate activists and environmentalists would come to a consensus years later.

Between November 2012 to December 2013, 99.9 percent of authors of peer-reviewed papers related to the climate agreed that climate change was happening because of human activity.

“Only one does not,” Gore said.

Every four to five years, the Intergovernmental Panel on Climate Change publishes  an extensive report on how climate change affects weather. 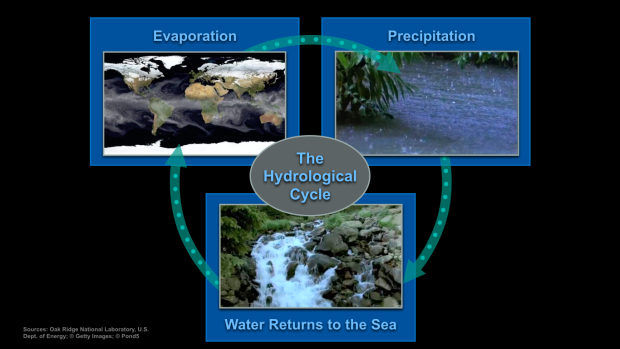 While the notion that more rain and drought could happen at the same time seems contradictory, Gore said climate change was affecting the Earth’s water cycle: Warmer global temperatures lead to more water evaporated, to stronger rains, to longer intervals of time between rain and more water sucked from the land.

“The same extra heat that evaporates more water from the ocean, causing bigger downpours and floods, pulls moisture even more quickly from the soil, causing longer and deeper droughts,” he had said in the 2006 film, “An Inconvenient Truth.”

In the Philippines alone, 38 percent of provinces will likely experience drought by April this year due to the pervading El Niño weather phenomenon, according to a March 2016 report by the Philippine Atmospheric, Geophysical and Astronomical Services Administration (Pagasa). 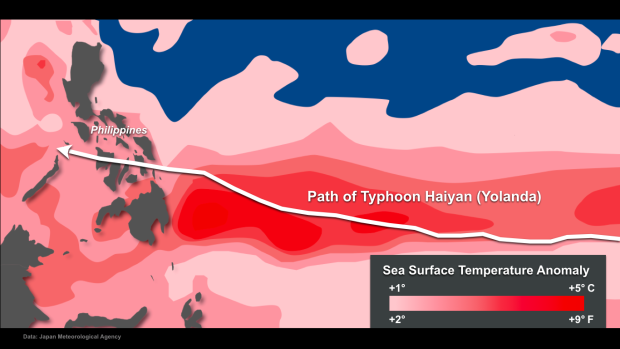 4. Waters surrounding the Philippine archipelago are among the hottest in the world, warmer by close to 3 degrees Celsius.

“The ocean waters are heating up more around the Philippines than any place else,” said Gore.

In the case of Supertyphoon “Yolanda” (international name: Haiyan), the sea surface temperature in November 2013 was then the highest in 134 years at 0.78 degrees above the 20th century November average of 12.9 degrees.

The same data from NOAA also concluded that because tropical cyclones form in hotter waters, the increasingly warm Pacific Ocean would only produce riper conditions for stronger storms.

5. Sea level in the Philippines is projected to rise two to three times faster than the global average.

Water levels in the country are expected to rise between 7.6 and 10.2 centimeters within the next decade, according to an International Development Research Center study published by Science Daily in October 2015. In contrast, global sea levels will rise only an estimated 3.1 cm by 2025.

Low-lying island communities will be the first to go underwater. In another study by the University of the Philippines, more than 167,000 hectares of coastland will go underwater–an estimated 0.6 percent of the country’s total land area.

“At least 13.6 million Filipinos may have to relocate to higher elevations due to sea level rise,” Gore said, citing the same research. Millions, too, currently live along the many coastlines littered across the country, an archipelago nestled between the South China Sea and Pacific Ocean.

6. The amount of mercury near the surface of many of the world’s oceans has tripled as the result of human pollution.

The oceans’ acidity is today at 8.2 pH from 8.1. While the difference may seem minor, National Geographic reported that the 0.1 rise is in truth a 25-to-30-percent increase, Gore said.

Immediate consequences of this rise could already be seen and felt; corals around the world are turning white–an effect called coral bleaching–including the Great Barrier Reef off Australia’s coast.

By 2100, Gore also reported, the Earth’s waters could be 150-percent more acidic, or acid levels not seen since 20 millions years ago. 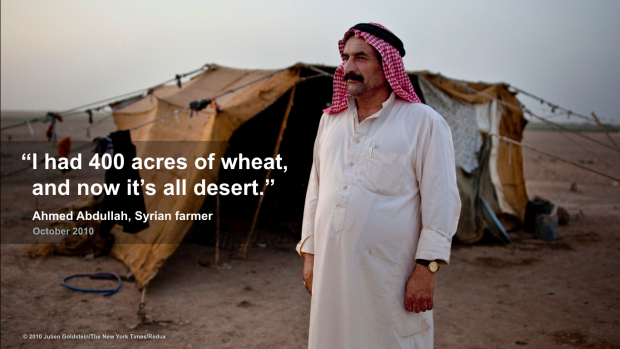 7. Food supply, water and global health are all vulnerable to climate change

Disruptions in these four global systems, among others, could lead to political or societal instability, Gore added.

He emphasized the correlation by using the current Syrian refugee crisis as an example. “The 2006 to 2010 drought turned 60 percent of Syria’s fertile land into desert and drove 1.5 million people into Syria’s already crowded cities.” The lack of food further fueled tension in the country, forcing thousands to flee to survive.

The US Department of State in 2014 even declared that climate change “will likely lead to food and water shortages, pandemic disease, disputes over refugees and resources, and destruction by natural disasters in regions across the globe.”

The Philippines, too, was also at risk of a similar crisis. Quoting the International Food Policy Research Institute, Gore said, “Up to 2.5 million Filipinos could be at risk of hunger,” should extreme weather events increase in 2016.

And the cause and effect doesn’t end with food and water shortage due to intensifying drought. Quoting Hugh Montgomery, co-chair of the 2015 Lancet Commission on Health and Climate Change, he stressed: “Climate change is a medical emergency.”

Climate change now a simple choice between what is right and wrong, says Gore