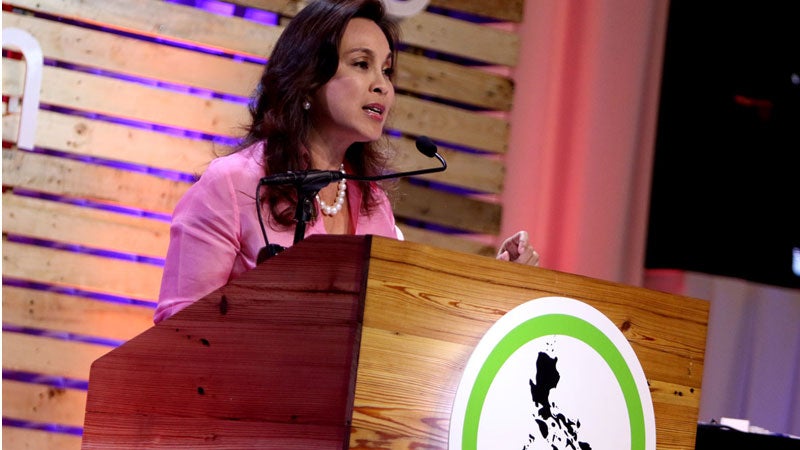 CLIMATE CHANGE Sen. Loren Legarda talks about the “The Road to Decarbonization” during the Climate Reality Leadership Corps Training. RICHARD A. REYES

THE WORLD’S foremost advocate for climate action and the country’s top environmental legislator on Monday called for a greater switch to renewable energy in the Philippines and around the world, citing a global trend to abandon fossil fuels for solar, wind and other zero-carbon energy sources.

Former US Vice President Al Gore, chair of the Climate Reality Project, and Sen. Loren Legarda pointed out the seeming paradox in the Philippines’ stance on climate change Monday at the opening day of the Manila leg of Gore’s international climate action training.

For while the Philippines helped in reaching global consensus to limit the global temperature rise to below 2 degrees Celsius at the historic Paris climate talks last December, it is forging ahead with the construction of 25 coal-fired power plants in the country in the next decade.

“Philippine consumption of coal has been on the upswing, which increased by 27 percent between 2012 and 2014. If global projections point to a decline in the share of coal in power generation, why is the Philippines taking the opposite track?” Legarda said in her speech.

She said government’s solution to the Philippines’ projected need for 13,167 megawatts of power by 2030 was to resort to the “easy and affordable” yet pollutive solution of putting up more coal-fed power plants, contrary to the global direction it advocated in Paris.

The 25 planned facilities have been granted environmental compliance certificates and “are now either operational or under construction,” Legarda said.

What the “easy and affordable” explanation fails to consider is the fact that there are external costs to coal, which, if considered, would render the coal-fired power plant as one of the most expensive forms of power generation.

She vowed to spend her remaining three years in the Senate to work toward a ban on coal-fired power plants.

“We will push for the progressive reduction of least-efficient coal-fired power plants and will work toward banning their construction,” said Legarda, the Global Champion for Resilience of the United Nations’ International Strategy for Disaster Reduction (UNISDR).

Gore hopes the Manila climate training could bring attention to the irony, saying in his two-hour presentation: “The Philippines is now about to build more coal plants. Maybe, maybe not. Maybe we can have an impact on that.”

He presented slides that showed how the Philippines was lagging in the shift to renewable energy, even as developing countries like Pakistan, Chile and Bangladesh have increased use of renewable sources, primarily solar power.

The United States, one of the world’s biggest energy consumers, is abandoning coal-fed power plants. Currently, coal-sourced power accounts for 0.01 percent of the national total, while the highest are wind and solar energy, each accounting for a third of the supply.

“All the proposed [coal-fired power] plants have been defeated by public opposition. These are all plants where retirement has been announced,” Gore said.

In the Philippines, coal accounted for 29 percent of electricity production in 2014, while oil was the source of 23 percent of power. Hydroelectric power is at 18 percent, natural gas at 14 percent, geothermal at 10 percent, and waste at 4 percent.

Accounting for only 2 percent of electricity production are solar, wind and biomass altogether amid the global decline in fossil fuel use and the “exponential growth” of renewable energy use.

Gore said the sun produced “enough energy every single hour to provide the entire world’s full energy use for a year.”