Broadcaster Teddy Locsin Jr. scoffs at use of Tagalog in debate 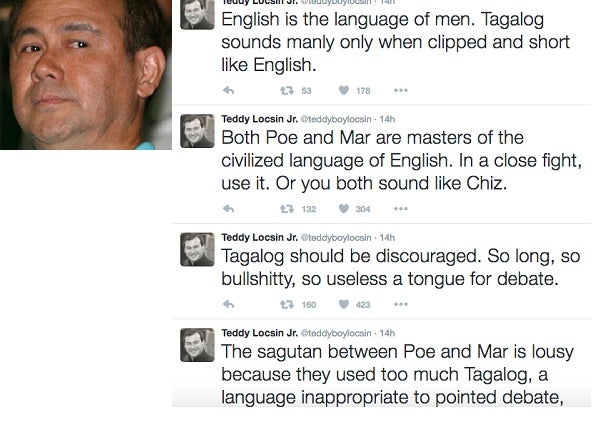 Broadcaster and journalist Teddy Locsin Jr. earned the ire of netizens and academics for discouraging the use of “Tagalog” during the presidential debates, saying that “it is long and useless.”

In a series of tweets on Sunday, Locsin said the exchange between Senator Grace Poe and administration presidential bet Manuel “Mar” Roxas II during the second government-sanctioned debate in Cebu City was “lousy” because they both used “too much Tagalog.”

He said that the language is “inappropriate for a pointed debate” and is “circular.”

“Tagalog should be discouraged. So long, so bullshitty, so useless a tongue for debate,” Locsin said.

The broadcaster also said that English is the language of “combat and not of sissiness.”

“English is the language of men. Tagalog sounds manly only when clipped and short like English,” he added.

Noting that both Poe and Roxas are supposedly “masters of the civilized English,” Locsin said the two bets should have used English during their exchange.

Netizens slammed Locsin’s view for supposedly being elitist and anti-Filipino. They also corrected him, saying that the national language as provided in the 1987 Constitution is Filipino, not Tagalog.

The alliance claimed that Filipino is the language of the 99 percent of Filipinos and that since the presidential debate is a government-organized event, it should be in Filipino.

The group asked Locsin to apologize for his remarks.

“Teddy Boy should apologize for belittling and insulting the country’s national language.”

The alliance also asked the broadcaster to “come down from his ivory tower to come breathe the free air with the common folks who use Filipino.”

“Teddy Boy will be awed by the depth of popular discussions in the national language in forums, community chats, assemblies, academic conferences, if he tries to learn his people’s language,” members of Tanggol Wika ended. AJH