Binay says rivals resorting to Goebbels tactic to malign him 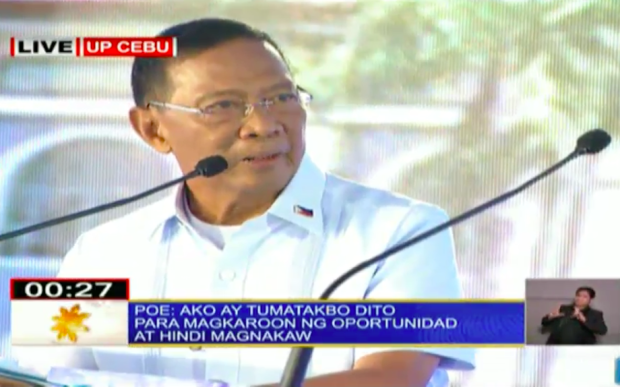 CEBU CITY – Vice President Jejomar Binay came up swinging against his opponents in the presidential race by comparing them to Joseph Goebbels, the chief propagandist of dictator Adolf Hitler during the infamous Nazi rule in Germany.

Binay mentioned Goebbels just after the Liberal Party standard-bearer Mar Roxas accused him once again of corruption in Makati.

Binay accused Roxas of indecisive leadership as a Cabinet secretary.

“Mr. Roxas, guilty of analysis by paralysis, can never make a decision on the way,” Binay said.

Roxas said he may be slow because he is incapable of corruption.

This was when Binay cited Goebbels and lashed back at Roxas and accused him of corruption over the anomalous maintenance contract entered into by sacked MRT General manager Al Vitangcol when Roxas was Transportation Secretary.

Goebbels was known for this statement: “If you tell a lie big enough and keep repeating it, people will eventually come to believe.”

Binay again compared Roxas to Goebbels when the latter lashed back at Binay over the allegations of overpricing the Makati car park building when he was mayor.

Roxas also mentioned allegations of overpricing hospital beds and sterilizers when his wife Dr. Elenita Binay was mayor of Makati which were the subject of graft cases against her before the Sandiganbayan.

Binay said the hospital beds and equipment may have been pricey but at least these were of high quality.