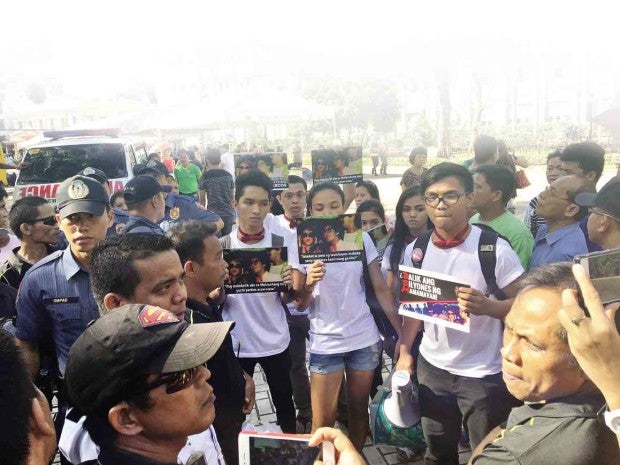 THERE were only six activists who held a protest rally against Sen. Ferdinand “Bongbong” Marcos Jr. in Cebu City but the attention they drew reverberated in Facebook after they were threatened with arrest and pushed around. JOSE SANTINO S. BUNACHITA/INQUIRER VISAYAS

CEBU CITY—Six millennials got a life’s lesson on what martial law was when at least 20 village watchmen, policemen and bodyguards of Sen. Ferdinand “Bongbong” Marcos ganged up on them and threatened to arrest them for holding a rally against the vice presidential candidate during his visit to City Hall on Thursday.

Justine Balane and other members of the militant Akbayan Youth Visayas were holding pictures of the young Marcos partying when his family still ruled the country in a rally at the Plaza Sugbo grounds in front of City Hall when policemen and village watchmen threatened to arrest them for holding a rally without permit.

“This is not 1972,” said Balane, who took to Facebook to narrate his and his friends’ experience.

“It happened in a day when we are supposed to be free to say what we want,” he said.

“It’s scary when we have a candidate who inspires a rabid mob to silence us, especially when we feel that our voices are the only things that can save us now,” said Balane.

Balane and his friends gathered outside City Hall around 3 p.m. shortly before Marcos arrived to visit Vice Mayor Edgardo Labella and some city councilors.

Balane, chair of the University of Philippines Cebu student council and member of Akbayan Youth Visayas, said at least five men wearing red shirts with prints that read Bongbong 2016 circled them to prevent them from getting near the entrance of the City Hall where the late dictator’s son was welcomed by the city officials.

The students, aged 18 to 20, were clad in white shirts and crimson bow ties to mimic the viral video on Facebook that showed the young Marcos wearing white shorts and shirt and a bow tie while partying in the presidential yatch when his father was still president.

Each student held printed copies of the snapshot of the young Marcos during that party.

Then Marcos arrived with a convoy of three vehicles and loudspeakers blaring with his campaign jingle.

Balane said one of those in Marcos’ staff “pushed us away saying we have no respect for the sitting senator.”

“He (Marcos staffer) told us to go away as we did not know what we were talking about. We stood our ground. We knew it was our right,” he said.

But his megaphone was pushed down by one of the senator’s staffers.

Balane said he saw Marcos glance at them and wave while climbing the stairs of City Hall.

He said they wanted only to convey the message that the Marcoses could not be trusted to hold a high elective office again after what happened during martial law.

“He should admit to the billions of pesos that the Marcoses stole. The youth should not forget,” he said in an interview during the rally.
Some Marcos supporters mocked them, saying they were too young to have their money stolen by the Marcoses since they were not even born during martial law.

“Do your mother and father know that you are an activist?” one Marcos supporter blurted out.

But the activists continued explaining how people should not forget the abuses of martial law.

They started to chant but a village watchman of Barangay Sto. Nino shouted at them and told them to keep quiet.

Afraid that they would be harmed since they were outnumbered, the students just stood in front of the City Hall, holding their small posters.