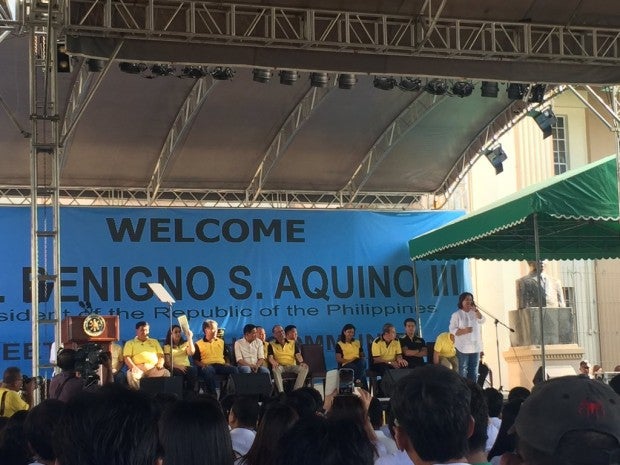 It can be recalled it was Aquino who initiated Arroyo’s detention for plunder charges. On Wednesday, the Supreme Court granted Arroyo’s request for a break to celebrate her 69th birthday.

Pineda on Thursday vowed to President Benigno Aquino III that Kapampangans would give all out support to the candidates of the ruling party, particularly its presidential bet Mar Roxas, in the upcoming elections.

She also praised the administration for providing PhilHealth benefits to 136,000 families and helping more than 50,000 poor Pampangueño households enrolled in the Pantawid Pamilyang Pilipino Program (4Ps).

Pineda vowed to deliver votes for the ruling coalition’s candidates despite her being an opponent of LP’s gubernatorial bet Ed Panlilio, who lost to her during the 2013 local elections. She then ran under the local party Kambilan.

The province, which has 1.2 million registered voters, is led by two members of the Pineda family, Lilia and his son Vice Gov. Dennis Pineda, whose patriarch Rodolfo “Bong” Pineda, allegedly the “jueteng lord” of Pampanga, has been investigated for reportedly running the illegal numbers racket in Luzon provinces.

It can be recalled that in 2012, Roxas, then head of the Department of Interior and Local Government, in front of Governor Pineda, gave a stern warning to the  police to stop illegal gambling operations in Pampanga.

Aside from President’s address to the beneficiaries, Roxas and his running mate Leni Robredo also gave speeches similar to those they deliver in other provinces, promising more jobs and education for the poor and expansion of the current administration’s successes.

They spoke before at least 15,000 locals here who were beneficiaries of 4Ps and local leaders who took part in the Bottom-Up Budgeting program of the DILG.

Two Pampanga residents also took the stage to give testimonies how these government programs helped lift themselves out of poverty through the Department of Education’s Alternative Learning System and the 4Ps.

Their fellow LP senatorial aspirant Mark Lapid, the former governor of Pampanga, was notably absent in the program.

All the speeches were part of the program dubbed “Meet the Community” but there was a deliberate effort to avoid criticisms that the administration is politicizing the 4Ps.

Majority of the audience did not wear yellow, as some of them attended the event in their uniforms in school and government offices.

And unlike in the previous events the President and administration candidates attended together, Aquino and the local official who declared support for LP bets did not raise the hands of Roxas and Robredo at the end of the program. TVJ