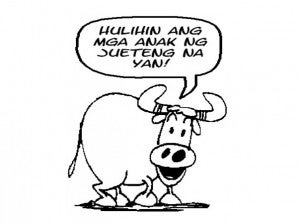 Roxas gave the order during the Regional Peace and Order Council (RPOC) meeting that was attended by Gov. Lilia “Baby” Pineda.

Bong Pineda had been investigated by the Senate for allegedly running jueteng in Pampanga and other Luzon provinces.

“My ‘mystery shoppers,’ who are civilians, placed bets on jueteng and I have the pieces of paper [where the number pairs that they bet on were written], to show that jueteng is still being played here,” Roxas said.

He raised the matter after Pineda reported that the cooperation of the police and local and provincial governments had brought down the number of crime incidents in Pampanga.

Former Pampanga Gov. Eddie Panlilio, a candidate of the administration’s Liberal Party (LP) who will face Pineda in the 2013 election for governor, accompanied Roxas to the RPOC meeting.

Panlilio, a priest, was quiet during the meeting and was a seat away from Roxas.

When Chief Supt. Edgardo Ladao, Central Luzon police director, tried to explain the status of the government-sanctioned Small Town Lottery (STL) and its difference from jueteng, Roxas cut him short and said: “It is not for you to say what is legal or not.”

Roxas then turned to Pagkalinawan and said: “I’m giving you a chance to review your data.”

Silence filled the room where all governors of Central Luzon, except for Zambales Gov. Hermogenes Ebdane Jr., were present.

“I can show you the papelitos …. I’m not joking about this,” Roxas said.

Pineda did not dispute Roxas’ information. She stayed in her seat, quiet during the entire discussion. She left when Roxas adjourned the meeting.

Pineda did not attend the awarding of the Department of the Interior and Local Government’s seal of governance and cash incentives to local and provincial governments.

Interviewed after the RPOC meeting, Pagkalinawan showed a copy of a letter of the Philippine Charity Sweepstakes Office (PCSO), which owns the STL franchise, to Eder Dizon, president of Suncove, the STL agent-corporation in Pampanga.

Signed by PCSO general manager Jose Ferdinand Rojas II, the Sept. 14, 2012 letter informed Dizon that the police had been deputized to arrest jueteng employees and financiers.

He could not say if Roxas’ informants placed bets with STL employees. “But we can verify if they are legitimate STL employees because we have a list of those,” he said.

Later at a press briefing, Roxas said he had “independently verified” the existence of jueteng in Pampanga. “I expect this to be stopped,” he said.

Asked why Panlilio, LP candidate for governor, was with him at the RPOC meeting, Roxas said the priest was one of his friends in Pampanga.

“I am one of those who believe in the leadership of Among Ed,” said Roxas, LP president on leave.