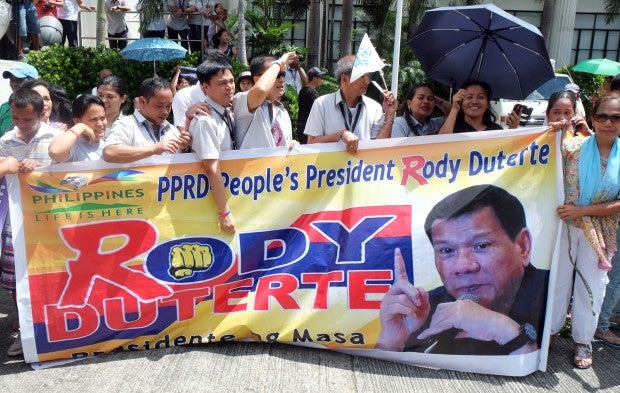 No campaign machinery? Not a big problem.

Having limited machinery has not stopped the tandem of Davao City Mayor Rodrigo Duterte and Sen. Alan Peter Cayetano from running an election campaign, thanks to volunteers who have helped boost the tandem’s drive.

Cayetano said he and Duterte have maintained that they would not accept contributions from people with vested interests.

“We put upon ourselves many restrictions,” Cayetano said, citing that they do not accept money from groups with transactions with the government.

Duterte has earlier disclosed that some wealthy people and businessmen had offered to finance his campaign but he rejected them for having known transactions with the government.

But how does the Duterte-Cayetano tandem increase their chances of winning in the upcoming May elections?

Cayetano said he and Duterte have been visiting even remote villages to push for their tandem, whose platform is hinged on fighting crime, illegal drugs, and corruption in government.

(The Mayor wants to take the campaign to the remotest areas.)

The senator said he and Duterte are not a “traditional tandem,” citing they have no campaign machinery even a Senate slate.

Cayetano said they are grateful for the volunteers who have been supporting their tandem through making their own campaign shirt and posters.

The senator also mentioned various artists and singers who vowed their support for their tandem even without an endorsement or talent fee.

Despite lagging behind in surveys, Cayetano said the campaign has been “good and exciting.”

He said he looked forward to attending debates to let the people know more about his platforms and programs if elected the country’s next vice president. CDG

Volunteer groups pop up to push Duterte for president