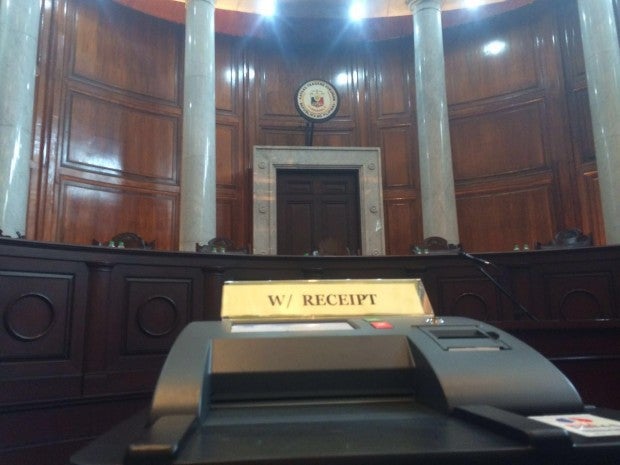 COMELEC vote counting machines at the Session Hall of the Supreme Court before the start of the oral arguments on the issuance of receipts. RAFFY LERMA

(Updated) Voting 13-0, the Supreme Court on Thursday dismissed with finality the appeal filed by the Commission on Elections (Comelec) and maintained on the need to issue receipts to voters on the May 9, 2016 elections.

Ruling was issued around thirty minutes after the high court conducted an oral argument where Comelec presented their timeline for the May 9 polls.

During the oral argument, Comelec conducted a demonstration of its vote counting machines (VCM).

Lim said on the first VCM, the voters have 15 seconds to see the onscreen verification of whether their votes were accepted or not.

On the second VCM, it will take 60 seconds or one minute for the on-screen verification and the printing of receipts.

Lim said each clustered precincts have 800 voters meaning there will be an additional 13 hours additional time excluding the initialization of the VCMs for 15 minutes after every 200 ballots.

Lim added that it should also be taken into consideration the time needed to change rolls of thermal papers and the possibility that there will be a paper jam.

He added that they will also include security features in the receipt, including ballot number and polling precinct.

But during interpellation, Lim admitted that the May 9 election is still possible, even if they will enable the system that issues receipts to voters, if they will not touch the source code.

“No need to revise the source code; we can enable it and generate the SD cards that can allow the printing of the receipts,” Lim said.

“Did you touch the source code?” Associate Justice Marvic Leonen asked, to which Lim said, “no.”

“So, it is possible that without touching the source code, it is possible to enable it to print out the receipt that does not have the features you mentioned, i.e. the precinct number, hashcode,”Leonen said.

Without touching the source code, issuing receipts minus the safeguards such as the precinct number and digital signature, Comelec admitted that they can still conduct the elections on May 9.

But Lim said based on the timeline presented before the high court, if they will include the safeguards, they need to reconfigure the source code and revise the SD card, which could move the elections to May 23.

Last March 8, the high court reminded Comelec that their duty is to enforce the law, and the law requires the poll body to activate the receipt-printing feature of the vote counting machines (VCM).

Under Republic Act 9369, the law that amended RA 8436 or the Automated Election System Law, aside from authorizing Comelec to use an automated election system during elections, the law also introduced the Voter Verification Paper Audit Trail or VVPAT, one of the minimum system capabilities of the automated election system and a major security feature of the vote-counting machines.

Petitioner former senator and now a senatorial candidate Richard Gordon explained that the VVPAT allowed voters to confirm whether or not the machine cast the vote correctly based on their choice, thereby ensuring the integrity of the elections.

He added that VVPAT is a “critical and indispensable” security feature of the automated voting machine.

“The law is clear because there is really nothing to discuss. The only thing being questioned now is timing. Its time we tell our leaders we have to do it, no excuses,” Gordon said during the oral argument.

“Every time they are about to do something, they came out with excuses. If they cannot do it, sorry, resign, get another job,” he added.

Comelec opted to do away with the receipt-printing, saying that it will extend the voting hours. It added that the receipt can be used in vote-buying and could be used by losing candidates to discredit the elections.

But the high court, in the decision written by Justice Leonen, said Comelec cannot opt to set aside the requirements of the law to assuage its fears regarding the VVPAT.

“Vote-buying can be averted by placing proper procedures. The Comelec has the power to choose the appropriate procedure in order to enforce the VVPAT requirement under the law and balance it with the constitutional mandate to secure the secrecy and sanctity of the ballot,” the high court said.

The high court pointed out that Comelec cannot do away with what is required them to do under the law because it “is not given the constitutional competence to amend or modify the law it is sworn to uphold.”

If there are policy objections, the high court said the remedy is for Congress to amend the law.

“We see no reason why voters should be denied the opportunity to read the voter’s receipt after casting his or her ballot. There is no legal prohibition for the Comelec to require that after the voter reads and verifies the receipt, he or she is to leave it in a separate box, not take it out of the precinct,” the high court said.