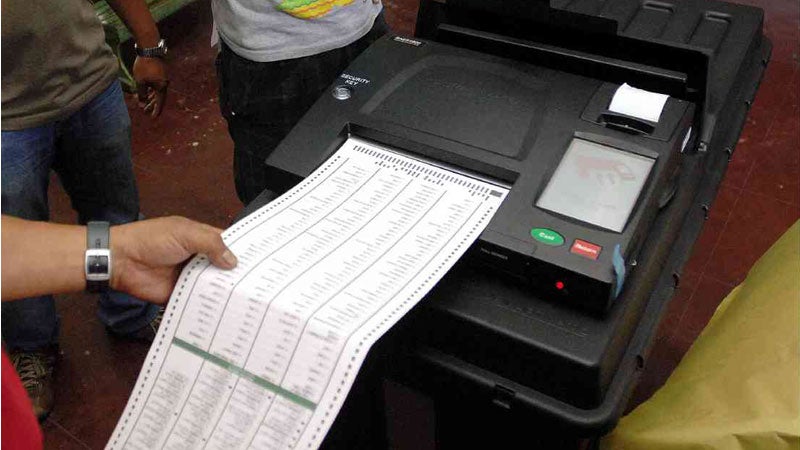 JUST TESTING A poll watcher inserts a ballot into a vote counting machine at a mock election in Metro Manila. INQUIRER FILE PHOTO

THE SUPREME Court on Tuesday ordered the Commission on Elections (Comelec) to issue voting receipts as a verification mechanism for the electorate in the May 9 elections, the first time the poll body was compelled to issue printouts of voters’ choices since automated counting in the country began in 2010.

In a unanimous ruling, the high court ordered the Comelec to use the voter verification paper audit trail in voting machines, which will issue a receipt to each voter after casting his or her ballot.

“The Commission on Elections is ordered to enable the vote verification feature of the vote-counting machines, which prints the voter’s choices,” the high court said in the dispositive portion of its ruling.

All 14 justices present at Tuesday’s en banc session issued the order in granting the mandamus petition that senatorial candidate Richard Gordon and his party Bagumbayan-VNP Movement Inc., filed on Feb. 22, which said that such “physical record” of a voter’s selections was necessary to ensure a transparent and credible election.

Only Associate Justice Arturo Brion was unable to vote as he was on leave.

In its decision, the high court said the Comelec may issue “guidelines to regulate the release and disposal of the issued receipts to ensure a clean, honest and orderly elections,” including mechanics on the storage of receipts.

To stay in precinct

The court said the poll body should ensure that “after voter verification, receipts should be deposited in a separate ballot box and not taken out of the precinct.”

The high court has yet to release the full ruling and only came out with the dispositive part of the decision at a press briefing Tuesday.

The Comelec was unable to answer Gordon’s petition as it missed the inextendible Feb. 29 deadline within which to respond. The high court last week junked the poll body’s plea for additional time.

The poll body had decided against using the verification mechanism, saying it might extend voting hours and the receipts might be used in the illegal practice of vote-buying.

In his plea, Gordon said the receipts were necessary to give voters “the opportunity to verify that the choices indicated on the paper record correspond to the choices that the voter has made in casting the ballot.”

Reacting to the Supreme Court decision, Gordon said the ruling was not just his victory, but that of the citizens whose votes would be a lot safer now.

“Democracy and transparency won today,” he said a statement. “The vote is a little bit more protected now. They have a piece of paper now to show their choices,” he said in a separate phone interview.

The people now have a better chance of having clean, honest and credible elections.

“Thanks to the Supreme Court, which is truly the last bastion of justice and democracy. The decision demonstrated that government agencies, like the Comelec, will never be allowed to run roughshod over people’s rights and will never get away with flagrant violations of the country’s laws,” he said.