Ombudsman Morales on alleged Binay camp’s threat: ‘I am not scared’ 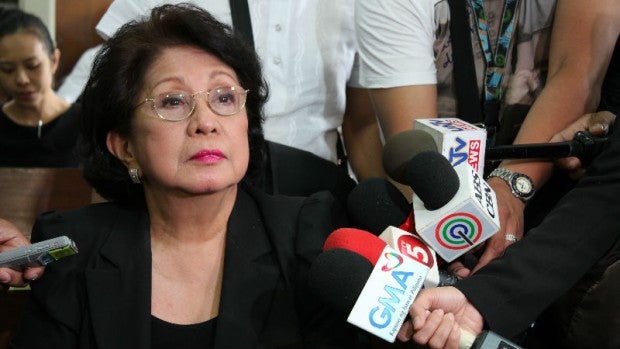 “I am not scared,” said Ombudsman Conchita Carpio-Morales after she claimed that the camp of Vice President Jejomar Binay has threatened to run after her if he wins the presidency in the upcoming elections in May.

Speaking to reporters on Wednesday, Morales said she had received a threat from the camp of Binay which was “personally conveyed by a valued ally of the vice president.”

“I received threats. The threat was passed through a high official from a close and valued ally-politician of the vice president,” Morales said.

“They said they are going to run after me if the vice president wins as president. Go ahead, I welcome that,” she added.

Morales said the threat was coursed through a government official whom she refused to identify.

“The threat was personally conveyed by a valued ally of the vice president. It was given to a government official, all right, verbal. It came to me. It was received by me that this particular official told they will run after me. If he wins,” she said.

Despite the threats she has been receiving, Morales said she would continue to do what is right.

“They are scaring me. I’m not scared. I’m not deterred from doing my work,” she said, referring to the damage suit filed by Binay against her.

The vice president’s camp has said that Morales was part of the demolition team, which aims to derail Binay’s presidential bid.

The Office of the Ombudsman has filed charges against the vice president’s son, dismissed Makati City Mayor Jejomar Erwin “Junjun” Binay, over the alleged anomalous construction of the Makati City Parking Building II.

The Ombudsman has also recommended charges against the vice president after his term ends in June since Binay is immune from any suit.

The United Nationalist Alliance (UNA) President Toby Tiangco has earlier accused the Ombudsman of hiring a public relations consultant to leak to the media the Commission on Audit (COA) special audit report that found anomalies in the construction of the Makati City Hall Building II.