Donald Trump: Is he the quintessential Florida Man? 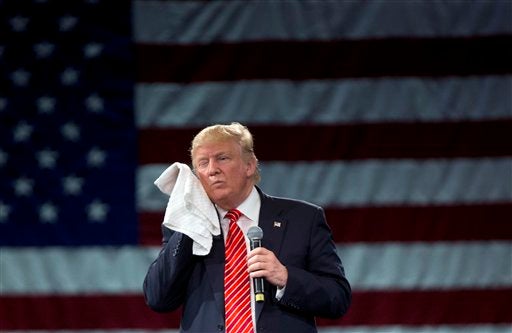 Republican presidential candidate Donald Trump wipes his cheek as he listens to a question from an audience member at a campaign event in Tampa, Fla., Monday, March 14, 2016. AP

TAMPA, Florida — Donald Trump drew thousands to his rallies around the Sunshine State, basking in their adoration, his face glowing like a Florida orange as he anticipated victory.

“Florida loves Trump, and I love Florida, so I think I’m going to win Florida,” he repeated.

Trump did win Florida on Tuesday, claiming victory with the bravado of someone who survived a particularly hellish South Florida commute.

The only actual Floridian in the race — Marco Rubio, a Cuban-American born in the 305 who earned all his degrees from Florida universities — failed to make his case, and Trump had already squashed the hopes of the GOP’s other Florida candidates like so many palmetto bugs.

Former Gov. Jeb Bush, who was supposed to have this thing locked up before the Southern primaries, flamed out shortly after he finally tried to find Trump’s jugular by labeling him “the chaos candidate.” Ben Carson, who lives in a West Palm Beach mansion, finally quit, too, and endorsed Trump.

Somehow, it’s Trump who captured Republican hearts in America’s strangest state. Trump made his name in New York City, displaying “New York values” with a brash, fast-talking, larger-than-life persona. But really, when you think about it, Donald Trump is the quintessential Florida Man.

“He embodies the Florida dream: the idea of a better life,” says historian Gary Mormino.

All the things people fantasize about in the frigid north — a beachfront mansion and endless riches to spend on endless rounds of golf — Trump has it and more, right here in Florida. 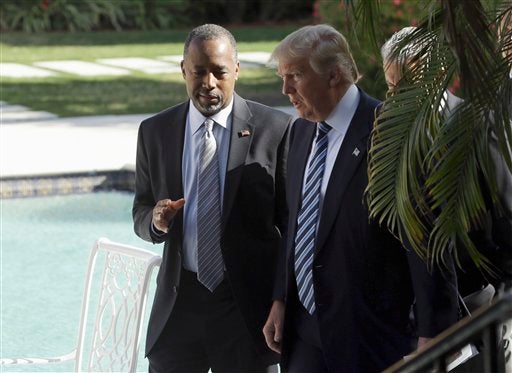 And he doesn’t just live the Florida lifestyle — he’s a Sunshine State soulmate.

But what about Rubio, the actual Floridian who dropped out of the race after Tuesday night’s crushing loss? Rubio seems youthful and has a vision for America, but “comes off as restrained,” George says, “much more buttoned up, which is ironic, since he’s from Florida.”

Like each winter’s snowbirds and two-thirds of state residents, Trump is from outside Florida. But he plays and does business here. In 2010, he launched a multi-level marketing company that sold vitamins to an adoring crowd of thousands in Miami. Earlier this month, after 2012 GOP nominee Mitt Romney declared that “a business genius he is not,” Trump summoned the media to his Trump National Golf Course in Jupiter.

While his Trump Tower penthouse in New York imitates the Palace of Versailles, his most famous home has been Mar-a-Lago. In 1985, he paid $10 million for the 58-bedroom Mediterranean revival mansion with a 20-acre oceanfront estate straddling Palm Beach Island.

Trump and his third wife, Slovenian model Melania Knauss, held their wedding reception at Mar-a-Lago, which Trump had turned into a high-end club, much to the consternation of his traditional Palm Beach neighbors. “Trump’s Palm Beach Club Roils the Old Social Order” was the headline on the Wall Street Journal story.

That’s another Florida Man attribute: roiling the social order. Trump’s been doing it for years.

Mormino, a professor emeritus at the University of South Florida-St. Petersburg, points out Trump bought into Palm Beach when national ads by the tourism bureau proclaimed: “Florida. The rules are different here.”

That could almost be Trump’s campaign slogan, no? 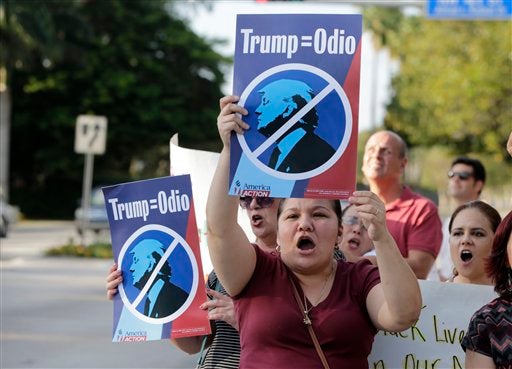 Berta Sandes, 38, of Miami, an undocumented immigrant from Nicaragua, holds a sign which translates to “Trump Equals Hate” during a protest against Republican presidential candidate Donald Trump outside of the Trump National Doral golf resort, Monday, March 14, 2016, in Doral, Fla. Voters go to the polls in Florida Tuesday for the primary election. (AP Photo/Lynne Sladky)

Take his four corporate bankruptcies: No big deal in Florida, which trails only California in bankruptcy filings. Or his marriages: 7 percent of Florida’s men have married three or more times, like Trump. The national average is 5 percent, according to the Pew Research Center. Or the fact he has made and lost fortunes in real estate. Floridians still gamble on slices of sunshine, despite the last housing bust.

“Trump’s got the Florida values and Florida lifestyle down,” says George.

Trump’s brand was nicked by a failed condo project in Tampa, but that, too, was classic Florida. Trump boasted in 2005 the 52-story Trump Tower Tampa would be “a signature landmark property so spectacular that it will redefine both Tampa’s skyline and the market’s expectations of luxurious condominium living.”

Two years later, Trump sued for $1 million in unpaid licensing fees, the developer went bankrupt, and buyers who put 20 percent down on a tower that was never built were out tens of thousands of dollars.

“Trump was like the Pied Piper who led us all into it, trusting him that he wouldn’t put his name on something bad,” said Mary Ann Stiles, a Tampa attorney who lost $100,000 on the deal.

Ah, but no one wants to dwell on the bad here. They’d rather play — preferably under the cool shade of a palm tree — like golfers and presidents John F. Kennedy and Richard Nixon did when they set up their Winter White Houses in Florida.

Trump has three world-class golf courses in Florida — Doral, Palm Beach and Jupiter. He invested hundreds of millions into Doral after rescuing it from bankruptcy, and the course has been a popular PGA Tour stop since 1962. But golf-watchers say this run is threatened by Trump’s remarks: the PGA canceled its Grand Slam of Golf at Trump’s course in Los Angeles after his comments disparaging Mexican immigrants, and Doral could be next.

Trump-haters may seek solace in this tidbit that Mormino pointed out: No Florida man has ever been elected president. TVJ