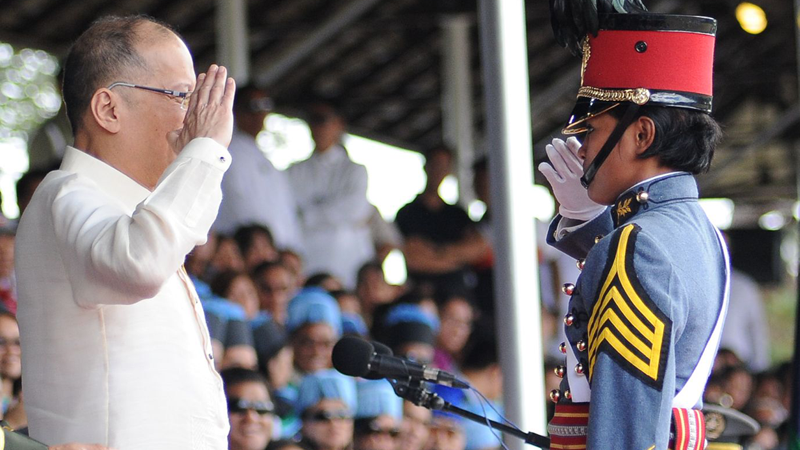 FORT DEL PILAR, Baguio City—The graduating class of the Philippine Military Academy (PMA) had many stories to tell—one was that the class “goat,” or the graduate at the bottom of academic performance, was again a female.

Observing the ritual, the PMA’s junior class on Saturday dunked Bermudez in the water—after the announcement of the academic awards.

It was the second time a female cadet had copped the goat honor. The first was Air Force 2nd Lt. Ernalyn Fernando of PMA Class of 2014.

A goat refers to the last cadet on the list of graduates. Instead of ridicule, a goat is accorded respect for striving to beat all odds and graduate along with the rest of the class.

But Gabay Laya had many more stories to tell. It was also the smallest graduating class in 40 years—with only 63 graduates.

It was also a time for the valedictorian, newly commissioned Navy Ensign Kristian Daeve Abiqui, to shine.

Abiqui’s speech was dramatic. At one point, he paused and handed his mother a handkerchief he pulled out from his shako (plumed hat).

He said it was the same handkerchief she gave him when he started training at PMA five years ago.

Abiqui also said the class goat should be proud because she bested 20,000 other applicants.

Gabay Laya was originally composed of 123 cadets but only 50 graduated, along with 13 cadets who joined them after being turned back from older classes due to bad grades or ailments.

“Being a pilot was my childhood dream,” Torres said.

His father died when he was 9 and his mother died the day PMA notified him of his admission to the academy in 2012.

“That was the sad part because I wasn’t able to tell my mother I was going to PMA,” said Fagsao, who ranked fourth in the class.

He said it was her memory that kept him from giving up despite the rigorous training. He cried when his high school and elementary school teachers came to congratulate him.

“We are very proud of the achievement of our youngest,” said John Melvin of Class of 2012. Jerson comes from Class of 2013.

Nine graduates are children of farmers, nine have parents who are government employees. One has a mother who drives a jeepney for a living.

Abiqui said in Filipino in his speech: “Like you, we believe talking peace is important. I believe a peaceful society is a progressive society, free from oppression and abuse, and a society that does not tolerate violence and greed.”