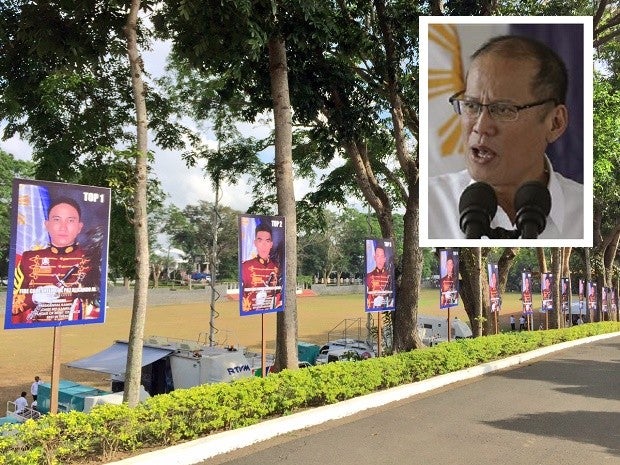 Portraits of this this year’s Top 10 graduates of the Philippine National Police Academy line the road leading to the school grandstand where President Benigno Aquino III (inset) urged them on Thursday, March 10, 2016, to do what is right. JULLIANE LOVE DE JESUS / INQUIRER.NET

(Given a choice between nation or self, which would you prioritize?)

That was a question posed by President Benigno Aquino III to graduating cadets during commencement exercises at the Philippine National Police Academy (PNPA) in Silang, Cavite, on Thursday.

Aquino explained that the upcoming elections is a time of temptation.

Aquino said he was confident that the cadets were trained well by the PNP to follow the straight path (daang matuwid).

(In the coming months, your marching orders are: Ensure that the elections is safe, peaceful and reflects the real choice of our bosses.)

After showcasing his achievements for the uniformed personnel, Aquino urged the graduates to do what is right.

The President reminded the graduating cadets that when they first entered the PNPA, there were still a lot of “horror stories” about the police force.

(These include the purchase of helicopters priced as brand new when they were actually second hand. There were also new policemen who, in order to get their own firearms, would have to pay for the rights of those retiring.)

Meanwhile, the Bureau of Jail Management and Penology (BJMP) has received funds of up to P393 million, which was used to buy firearms, portable radio systems and prisoner vans.

The Bureau of Fire Protection, on the other hand, received a total of P4.46 billion under Aquino’s term. This was allocated for the purchase of fire trucks, protective gear and self-contained breathing apparatus.

The President recalled that when he was still a legislator, he learned that the lack of breathing apparatus forced firemen to just use water from their fire hoses to counter the thick smoke coming from burning structures.

Aquino also told the graduates about the Executive Order he signed providing for higher allowances.

It was the last time that Aquino would attend a PNPA graduation as president of the Philippines.

Before his speech, Aquino inspected the PNPA Cadet Corps and presented their diplomas and awards.