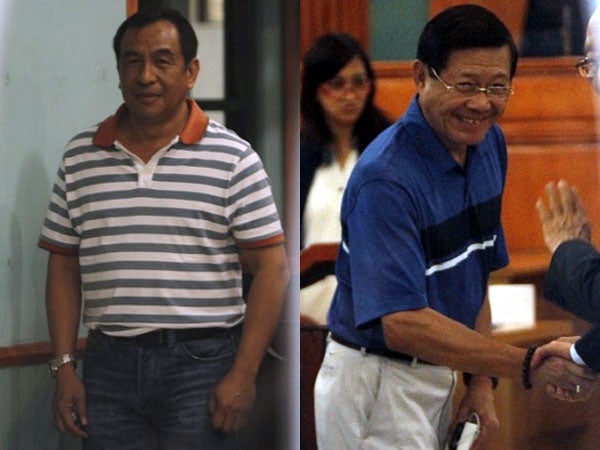 After over two years in detention, former Philippine National Police (PNP) chief Avelino Razon Jr. was allowed to post bail by the Sandiganbayan from his malversation and graft charges over the alleged ghost repairs of police vehicles worth P385.5 million.

In a resolution dated March 9, the anti-graft court Fourth Division allowed Razon and 13 others to post their bail after the court earlier granted the motion for reconsideration filed by co-accused former police director Geary Barias.

The court on March 7 reversed its earlier denial of Barias’ bail and allowed the NCR police office director to post his P400,000 bail for his two counts of malversation through falsification of public documents.

In granting Barias’ bail, the Sandiganbayan cited a Supreme Court ruling on Dec. 8, 2015, on the case of former Bacolod City Mayor Luzviminda Valdez, saying that the high court ”has now ruled that an accused charged with the complex crime of malversation through falsification of public documents is entitled to bail as a matter of right.”

The court said Razon on Wednesday posted his P520,000 bail from two counts of malversation through falsification of public documents and four counts of graft.

In allowing Razon and the other accused to post bail, the anti-graft court said because of the recent Supreme Court ruling, any accused in the complex crime of malversation with falsification of public documents is now entitled to bail.

“In line with this Court’s disposition in its Resolution of March 7, 2016 eventually granting accused Geary L. Barias’ motion to fix bail, and conformable to the Supreme Court’s recent decision…holding that bail is now a matter of right for those charged with the complex crime of malversation through falsification of public document, all accused similarly situated as accused Barias in these cases are now likewise allowed to secure their respective provisional liberties,” the court said.

The court also allowed the other police officers at large to post bail.

Razon, the first PNP official to face graft, was accused of conspiracy in the awarding of the project to a private contractor for the ghost repairs and maintenance of 28 V-150 light armored vehicles in 2007.

In Feb. 2015, Razon and the other accused have been denied bail by the Sandiganbayan due to strong evidence of guilt.

According to the complaint filed by the Ombudsman, the contracts awarded to six firms in 2007 were riddled with violations of Commission on Audit regulations because the cost of repairs exceeded 30 percent of the acquisition cost.

The procurement process was also said to be anomalous due to lack of bidding documents, bidders, preprocurement conference and post-qualification process, and also due to ineligibility of the private suppliers to enter into the contract.

The COA also found the payment for replacements of parts to be excessive.

“Despite these irregularities which would have prevented the questioned transactions from taking place, the accused still proceeded with the procurement. They facilitated the issuance of the purchase/work orders, disbursement vouchers, checks and other reports, wherein they specified that the materials were received in good order and condition; that the objects of purchase were okay as to quality and specifications; and that the supporting documents therefore were complete and proper,” the resolution read.

“As the reports…found otherwise, a presumption now exists that the accused resorted to a false narration of facts which was necessary for them to commit malversation,” it added.

After posting their bail, Razon and five other top police officers are now allowed to be freed from the Philippine National Police Custodial Center at Camp Crame where they were held since the court ordered their arrest in August 2013. CDG