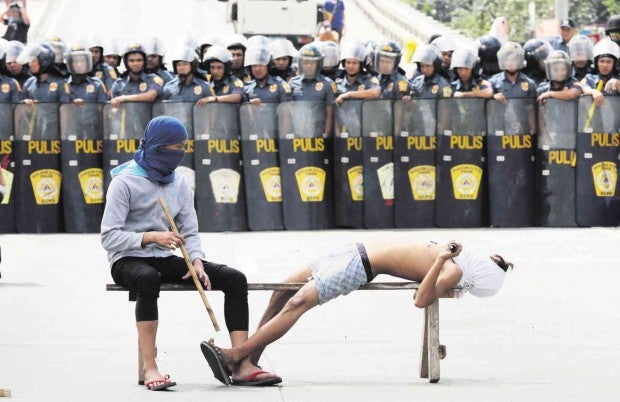 ROAD NOT (YET) TAKEN  Two of the residents facing eviction in Culiat, Quezon City, defy a police phalanx by just sitting it out on Luzon Avenue on Wednesday. Grig C. Montegrande

After two days of violent clashes with the police that left several people wounded, informal settlers occupying a private lot in Barangay Culiat, Quezon City, have agreed to vacate the area by Friday.

The agreement allowing a three-day “grace period” was reached Tuesday, a day after the authorities started enforcing a writ of demolition issued in August by the Quezon City Regional Trial Court–Branch 98.

The demolition order was issued on behalf of the Picache family, owners of the 2,003-square meter lot occupied by about a hundred families, according to court sheriff Bienvenido Reyes Jr. The residents recently failed to secure a temporary restraining order from the Court of Appeals.

Reyes said the settlers never laid claim over the property but questioned the veracity of the Picaches’ land title because it supposedly covers not the Culiat site but another property in Bulacan province. This claim was eventually disproved in the QC Metropolitan Trial Court.

From Tuesday up to Wednesday noon, the residents put up a fight against demolition teams and their police backup. They barricaded a stretch of Luzon Avenue with tricycles while hurling slabs of concrete and plastic bags containing excrement at the police.

Bernardo on Wednesday said the informal settlers agreed to “self-demolish” but asked for three more days. “They’re not prepared yet.”

Reyes, the court sheriff, agreed to suspend the demolition but said the residents should put their promise in writing.

Bernardo said Quezon City Rep. Kit Belmonte on Tuesday had asked the National Housing Authority to look for a relocation site for the families facing eviction.