No word on how citizenship, residency issues were decided
By: Tarra Quismundo - Reporter / @TarraINQ
Philippine Daily Inquirer / 12:00 AM March 09, 2016

THE SUPREME Court has cleared the way for Sen. Grace Poe to run for President, voting to reverse the Commission on Elections (Comelec) orders disqualifying her from the tight race just two months before Election Day.

In an en banc session Tuesday, nine justices voted in favor of Poe’s contention that the Comelec had committed grave abuse of discretion in canceling her certificate of candidacy (COC) for President, while six justices affirmed the poll body’s action.

“That’s the only detail I have: 9-6. Nothing else has been authorized,” Supreme Court spokesperson Theodore Te said in a hastily called briefing at 3 p.m. Tuesday, the second held on updates from the en banc session.

There was no word yet how the court decided the matter of Poe’s citizenship and residency.

The Comelec, acting on four petitions against Poe’s candidacy, had ruled that the senator had committed material misrepresentation in declaring that she was both a natural-born Filipino and a 10-year resident of the Philippines.

In a supplemental statement issued later, Te said: “It may not be safe to report which ground the court ruled upon and used as basis for the vote, i.e., between citizenship and residence.”

“Thus, it may be best to simply say, the SC grants Senator Poe’s petitions, 9-6, allowing her to run for the presidency,” he added.

A high court insider privy to the deliberations said the majority held that foundlings, or abandoned babies with unknown parentage, were “presumptively or disputably presumed natural-born” despite the silence of the Constitution on their citizenship status.

The justices held two hours of deliberations starting at noon Tuesday, taking an hour off for lunch and resuming at 2 p.m. The voting was concluded just before 3 p.m., according to a source privy to the deliberations.

The justices who voted in favor of Poe included those who strongly argued for the rights of foundlings during oral arguments on the case: Chief Justice Maria Lourdes Sereno and Associate Justice Marvic Leonen.

The justices who voted to disqualify Poe included three magistrates who served as members of the Senate Electoral Tribunal (SET) and decided to disqualify Poe because she was not a natural-born Filipino. The three were Associate Justices Antonio Carpio, Teresita Leonardo-De Castro and Arturo Brion.

The three justices had voted against the majority SET decision that upheld Poe’s status as a natural-born citizen in a separate challenge to her 2013 senatorial victory.

The rest who voted to bar Poe’s presidential bid were Associate Justices Bienvenido Reyes, Estela Perlas-Bernabe, and Mariano del Castillo, who was originally the assigned writer of the court’s opinion.

Of President Aquino’s six appointees in the high court, four voted in favor of Poe—Sereno, Leonen, Perez, Jardeleza and Caguioa—while the two others—Reyes and Bernabe—upheld her disqualification.

“The court will release the text of the decision and separate opinions in the next few days. As you may understand, upon a voting, the court will then finalize who will write for the court,” Te told reporters. 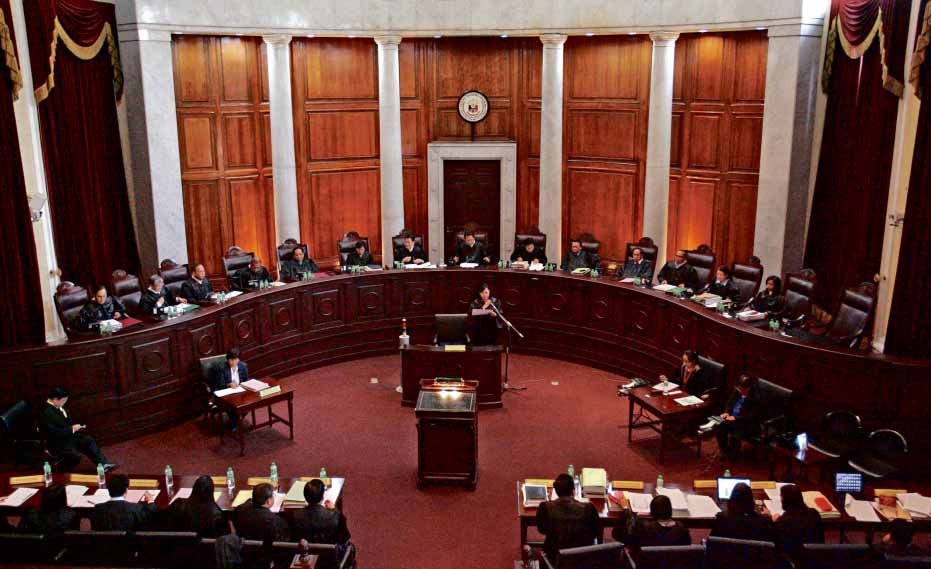 IT’S A GO FOR GRACE The Supreme Court rules Sen. Grace Poe can run for President, junking decisions of the Commission on Elections disqualifying Poe based on her citizenship and residency. LYN RILLON

Poe’s lawyer George Garcia said: “This is a miraculous day! Grace Poe is truly a woman of destiny. Thanks to the Supreme Court.”

Solicitor General Florin Hilbay, who had argued for the rights of foundlings and recognition for Filipino migrants during oral arguments, said: “The result is both legally correct and just. The decision will be a legacy of the court’s solicitous regard for marginalized groups and overseas Filipino workers.”

The four private petitioners who opposed Poe’s candidacy vowed to fight the ruling through a motion for reconsideration.

“It’s a dangerous result. It’s a recipe for chaos. The Constitution was bastardized. We will file a MR (motion for reconsideration) as soon as it (decision) becomes official,” said lawyer Manuelito Luna, who represents former Sen. Francisco “Kit” Tatad.

Former University of the East law dean Amado Valdez saw a “possible betrayal of public trust and culpable violation of the Constitution” in the court ruling.

“We will file an MR on the ground of culpable violation of the Constitution and betrayal of public trust,” Valdez said in a statement sent to reporters Tuesday.

Said De La Salle University professor Antonio Contreras: “I can only respect the ruling but will not accept it. We did not lose today. It is the rule of law that lost.”

Contreras blasted the nine justices who voted for Poe, saying they had “reversed well-established jurisprudence on residence,” while expressed gratitude to the six who voted to uphold Poe’s disqualification.

“I feel sorry for those who came before her (Poe) who were similarly situated but were prevented from running,” he said in a statement.

Former Government Service Insurance System chief legal counsel Estrella Elamparo said: “Although I’ve been hearing about this scenario, I am still shocked because the law is so clear. I cannot comment beyond that because I have not read the decision.”

In rulings upheld by the Comelec en banc, the poll body’s First and Second Divisions had found that Poe was not qualified to run for President as she was not a natural-born Filipino and would only be a Philippine resident for nine years and six months by Election Day in May.

The Comelec held that Poe may not be regarded as a natural-born Filipino as provisions of the 1935 Constitution, which covers her birth year 1968, is silent on the citizenship status of foundlings.

It also bound Poe to her 2012 COC for senator, where she had declared that she would be a Philippine resident for six years and six months come the 2013 Election Day.

Poe’s camp asserted that international law gave foundlings natural-born status, and that her period of residency in the Philippines should be reckoned from 2005, when she and her family returned after decades of staying in the United States.

A baby abandoned at a church in Jaro, Iloilo province, in 1968, Poe was raised by the late actor Fernando Poe Jr. and actress Susan Roces. She had spent most of her adult life in the United States, spurned her Filipino citizenship and became a US citizen in 2001, after marrying Filipino-American Neil Llamanzares.

A school teacher in the United States, she returned to Manila on May 24, 2005, reacquired her Filipino citizenship in 2006. But she renounced her American citizenship only four years later, in 2010, when she was appointed chair of the Movie and Television Review and Classification Board.