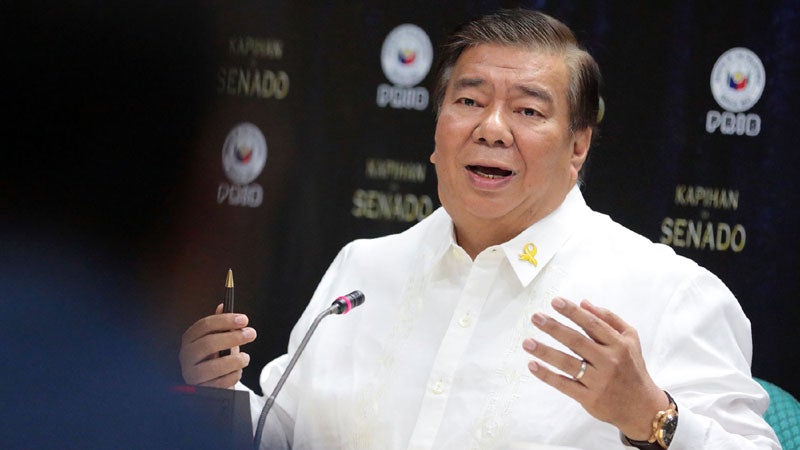 WITH the preelection surveys showing a tight race among four presidential candidates, leaders of the administration Liberal Party (LP) Monday urged the Supreme Court to issue a decision swiftly on the disqualification case against the independent front-runner, Sen. Grace Poe, to preserve the integrity of the balloting.

Senate President Franklin Drilon, vice chair of the party that has fielded Mar Roxas as its standard-bearer, has repeatedly called on the 15-member tribunal to resolve Poe’s petition, citing grave abuse of discretion, to nullify the decision of the Commission on Election (Comelec) setting aside her candidacy.

“If she is qualified, I hope the decision will be released so there will be no more doubt. If she lacks residency and is not a natural-born [Filipino], the high court should say so immediately to be fair to our people and so the integrity of the elections remains intact,” Drilon said in a radio interview.

“I’m not overly concerned if the decision is for or against Grace. What is important is that they do not dribble the case and leave us hanging,” Speaker Feliciano Belmonte Jr., also a LP vice chair, said in an interview with reporters.

The plea of the administration coalition stalwarts was made on the eve of another en banc session of the court amid widespread speculation that it would finally produce a resolution on the disqualification case that has dragged on in the Comelec for several months and later in the Supreme Court.

According to a source in the court, who declined to be named due to lack of authority to speak to the media, the justices will submit their final position papers and continue their deliberations, after which a vote will be held at a special en banc scheduled for tomorrow.

However, if the deliberations will not be finished today, they will be continued tomorrow and another special en banc session for the voting will be scheduled, most probably on Thursday or even Wednesday next week, the source added.

The five rounds of oral arguments held in the high tribunal in January and February centered on whether Poe, a foundling who became a naturalized American citizen but later regained her Philippine citizenship, can be treated as a natural-born Filipino, which is a requirement for presidential candidates.

Another major issue was whether Poe satisfied the 10-year residency requirement. She reckons her residency in the country from her arrival in May 2005; the Comelec and the four private respondents countered that she only established residency when she became a dual citizen in July 2006.

The Comelec has said Poe was guilty of material misrepresentation when she declared in her certificate of candidacy that she is a natural-born citizen and has a 10-year residency prior to the May 9 balloting.

Poe’s biological parents remain unknown. Adopted by movie stars Fernando Poe Jr. and Susan Roces, she spurned her Filipino citizenship and became an American, lived in the United States with her American husband before returning home to contest the highest office in the land.

Drilon underscored the need for the high court to hand down its decision, especially since the presidential race had become tighter for Poe, former Interior Secretary Roxas, Vice President Jejomar Binay of the United Nationalist Alliance and Davao City Mayor Rodrigo Duterte of PDP-Laban.

Although Roxas has been trailing in voter preference surveys, Drilon said he expected Roxas to edge out his rivals at the start of the local election campaign period on March 29 when the full party machinery would roll out.

He said Roxas’ platform of government would be attractive to voters. Roxas has pledged to continue the “daang matuwid” program of the Aquino administration.

Drilon said the magistrates were “duty-bound to decide this case as soon as possible.” He said the high court had studied everything about the case, pointing out that the case had been pending for a prolonged period.

During the radio interview, Drilon was asked about the potential backlash on the printing of ballots with Poe’s name on it in the event of an adverse decision against her. “I assume this is something that can be handled,” he said.

Poe is hanging on the words of Chief Justice Maria Lourdes Sereno as she prays for a positive verdict.

“We continue to hope and we remain confident because of what we have heard from the Supreme Court Chief Justice herself. She said foundlings should have a right in our country,” Poe said in an interview in Butuan City Monday.

Poe said she was praying for what was “just and fair” and that she was ready for whatever the Lord wanted.

Sereno cited the broad implications of a court ruling on whether a foundling like Poe was a natural-born citizen or not during the oral arguments.

The Chief Justice said Poe’s disqualification on her failure to identify the citizenship of her real parents would affect not only those running for President, Vice President, senator, congressman, justice or judge but also foundlings who are high-ranking civil servants, those applying for a license for certain professions and those seeking government scholarships. Sereno also pointed out that many countries recognized foundlings as citizens.

“I was told they would come out with a decision this week. I am thankful because this means we will finally resolve this,” said Poe who hoped she would have something to celebrate after the high court ruling.

“I hope we will be given the chance to serve. I pray that the Supreme Court will give the public the chance to elect whom they want as their leader,” she said.

“I’ve always believed there is nothing certain in our life, we just have to do our best everyday. For me, it’s a big thing to see a lot of people showing their trust and faith in me,” said Poe, who cited the Nationalist People’s Coalition’s endorsement of her candidacy despite the pending disqualification case.