WASHINGTON, United States — Scientists have discovered a “ghostlike” octopus in deep water off Hawaii that appears to belong to a previously unknown species, researchers said.

A submersible research craft spotted the small, translucent octopus by chance around 2.5 miles (4 kilometers) underwater off Necker Island on the northwestern end of the Hawaiian Archipelago, the US National Oceanic and Atmospheric Administration (NOAA) said.

“As the ROV (remotely operated vehicle) was traversing a flat area of rock interspersed with sediment at 4,290 meters, it came across a remarkable little octopod sitting on a flat rock dusted with a light coat of sediment,” the NOAA’s Michael Vecchione said.

“The appearance of this animal was unlike any published records and was the deepest observation ever” for this type of marine creature, he added, in a statement released on March 2.

The octopus — nicknamed “Casper the Friendly Ghost” on social media — was caught on camera by the Okeanos Explorer, which the NOAA uses to explore underwater geology and marine life in little-known parts of the world’s oceans.

Vecchione said the newly discovered octopus has a single row of suckers on each tentacle instead of the usual two, but is “particularly unusual because it lacked the pigment cells, called chromatophores, typical of most cephalopods, and it did not seem very muscular.”

“It is almost certainly an undescribed species and may not belong to any described genus,” he said. 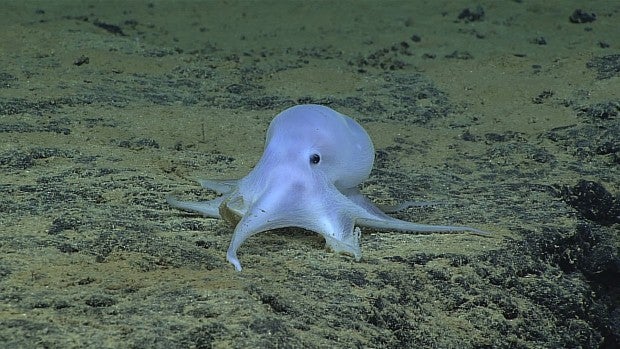 This image provided by courtesy of NOAA Office of Ocean Exploration and Research, Hohonu Moana 2016, shows a possible new species of octopus. Scientists say they have discovered what might be a new species of octopus while searching the Pacific Ocean floor near the Hawaiian Islands. Michael Vecchione of the National Oceanic and Atmospheric Administration says in a statement Friday, March 4, 2016, that on Feb. 27 a team found a small light-colored octopus at a depth of about 2.5 miles in the ocean near Necker Island. NOAA / AP